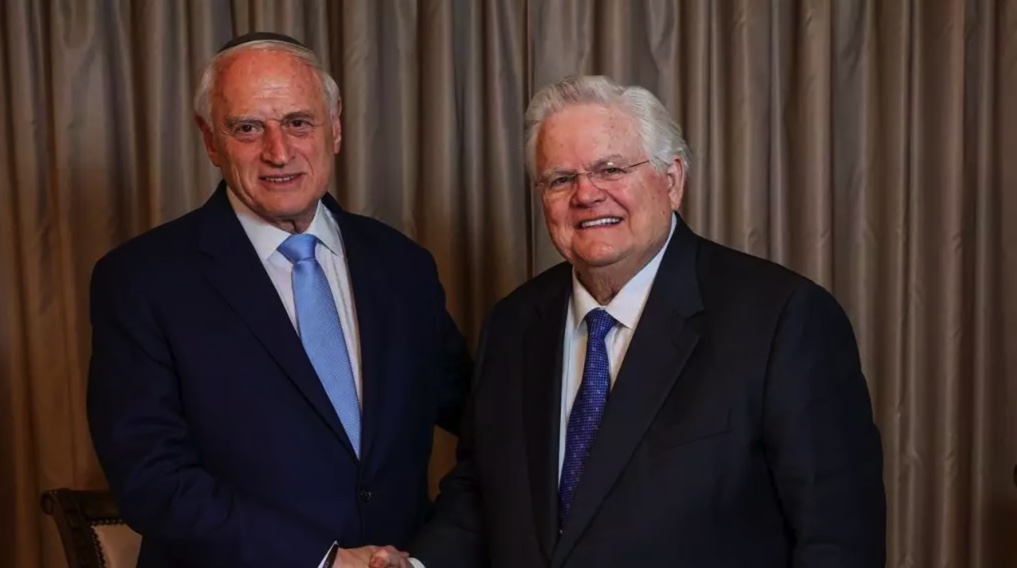 Pastor Hagee hails ‘ties that will hold for generations’

A Christian pastor, a Jewish leader, and an Israeli journalist walk into a room and start talking. This is no joke, and it’s not an ordinary event, but this week, all three met in Jerusalem.

John Hagee is one of the most influential Christian pastors in the US, and possibly North America. He has played a founding role in the history of Evangelical Christians standing by Israel. His movement, Christians United for Israel, numbers 11.5 million members. When the Russo-Ukraine war broke out last month, Hagee raised $2.5 million to help extract Ukrainian Jews and bring them to Israel. Last week, he spent a night at Ben-Gurion Airport to witness women with small children and infants, carrying “all their worldly belongings” in backpacks, step off the plane, which he says was “heart-rending.”

On Sunday, Hagee was awarded two honors for his work on behalf of Israel: one from the Menachem Begin Heritage Center and the second from the Great Synagogue of Jerusalem. Hagee’s friend Malcolm Hoenlein, executive vice chairman of the Conference of Presidents of Major American Jewish Organizations, who also serves as president of the Great Synagogue, was present at both ceremonies. Hagee, 82, was very moved.

He began working with Hoenlein, one of the most prominent leaders of US Jewry in the last 50 years, at the end of the 1980s.

At a time when ties with pro-Israel Christians have become routine for the American Jewish leadership, many in Israel are still skeptical of the relations, despite the Evangelical movement’s growing importance in shaping Israel-US relations and bolstering the American commitment to Israel.

“I’ve never had one minute of regret. My appreciation [for them] only grows,” says Hoenlein, an Orthodox Jews whose sons and grandsons are yeshiva students.