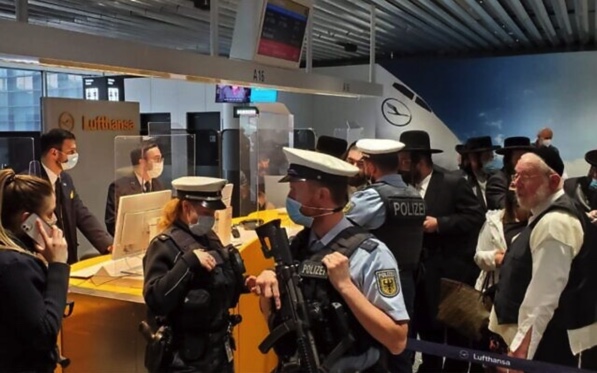 A group of Orthodox Jews are demanding an apology from Lufthansa airlines after they were expelled from a flight from New York to Budapest last Tuesday.

The travelers say all of the identifiably Orthodox Jews were prevented from boarding a connecting flight in Frankfurt, Germany, because a group of passengers had allegedly not complied with the German national carrier’s mask regulations on the first leg of the flight.

In a video taken by a passenger, a Lufthansa supervisor is seen saying that “everyone has to pay for a couple,” adding, “It’s Jews coming from JFK. Jewish people who were the mess, who made the problems.”

The video, first reported and shared by the discount travel website Dan’s Deals, was posted to YouTube and Instagram, where it sparked angry comparisons to the treatment of Jews during the Holocaust.

The video, blurred because it is illegal to record someone without their consent in Germany, was taken down for violating YouTube and Instagram’s hate speech policies. It is still available on Twitter.

The passengers were also banned from purchasing another ticket to Budapest for 24 hours.

The Jewish travelers were on an annual pilgrimage to visit the grave of Rabbi Yeshayah Steiner, a wonder-working rabbi who died in 1925 and is buried in a village in northeast Hungary. According to Dan’s Deals, an estimated 135 to 170 Jews were on the flight, 80 percent of whom wore visible Hasidic clothing.