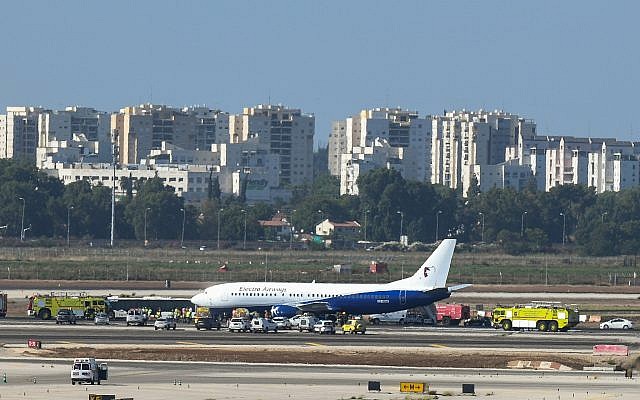 A passenger plane with a blown tire landed safely at Ben Gurion Airport on Monday after rescue services were put on high alert for a potential emergency situation.

Over 100 ambulances, firetrucks and emergency workers had been scrambled to the airport and Israeli fighter jets followed the Boeing 737 as it prepared to land four hours after taking off from Cologne, Germany.

After touching down, the Bulgarian charter plane used its engines to slow down to avoid putting pressure on the tires. The airport froze all landing and takeoffs moments before the plane landed.

The major emergency was declared after ground crews in Cologne found pieces of the tire after the Electra Airways flight took off, a statement from Ben Gurion Airport said.

The plane was carrying 152 passengers. Several people were treated for anxiety as the plane circled above the sea to dump fuel ahead of the tricky landing.

Ramon Airport in the south had been prepared to receive flights that might be diverted from Ben Gurion if needed.