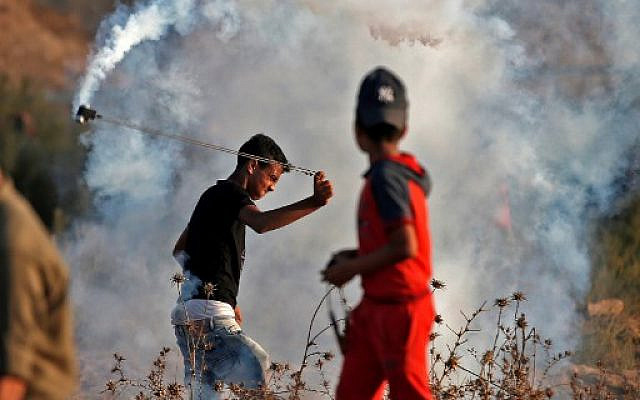 Over 4,000 Palestinian demonstrators took part in weekly protests Friday along the border between the Gaza Strip and Israel, with several hundred rioting and clashing with Israeli troops.

Rioters threw rocks and explosive devices at troops who responded with tear gas and live fire.

The Hamas-run health ministry in Gaza said 48 Palestinians were wounded in the clashes, 26 from live fire.

Since March 2018, Palestinians have been holding weekly “March of Return” protests on the border, which Israel has accused Gaza’s Hamas rulers of using to carry out attacks on troops and attempt to breach the security fence. Hamas, an Islamist terror group, seeks to destroy Israel.

Last month, an Egyptian intelligence delegation paid a secret visit to Israel due to fears of a fresh flareup between Israel and Hamas in the Gaza Strip amid the political deadlock in Jerusalem, Channel 13 reported.

The envoys from Cairo met with senior officials from the Prime Minister’s Office for the first time since the September 17 elections in Israel, which resulted in no clear winner. Egyptian officials are concerned that the situation in Gaza will once again spiral into violence, and with only a caretaker prime minister governing in Jerusalem, Israel will have a harder time preventing the situation from escalating to a full-blown war.

Egypt has brokered a number of truces between Israel and Hamas in recent years.