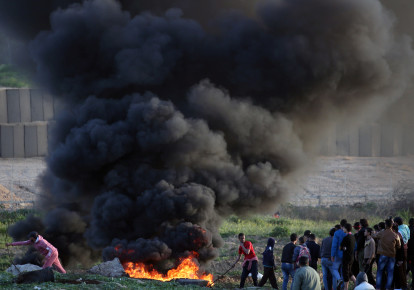 Factions in the Gaza Strip are urging Palestinians to participate in Saturday’s mass protests near the border with Israel afternoon prayers. The factions urged Palestinians on Thursday to “maintain the peaceful and popular nature” of the protests, and said they don’t want to give Israel an excuse to use force against the demonstrators.

Saturday’s protests marking the first anniversary of the “Great March of Return” weekly demonstrations coincides with Land Day, an annual day of commemoration of the events that took place in Israel in 1976 after the Israeli government’s decision to expropriate thousands of hectares in the Galilee.

The organizers said they are hoping that tens of thousands of Gazans will join the mass protests.

The call for mass participation in Saturday’s protests near the border with Israel came as Egyptian intelligence officials held talks in the Gaza Strip with leaders of various Palestinian groups, including Hamas and Islamic Jihad, to discuss ways of averting an all-out confrontation between the Palestinians and Israel.

The Egyptian security delegation, headed by Gen. Ahmed Abdel Khaleq, arrived in the Gaza Strip late Wednesday. On Thursday afternoon, the delegation headed back to Israel to brief Israeli officials on the outcome of their talks with the Palestinian groups in the Gaza Strip.