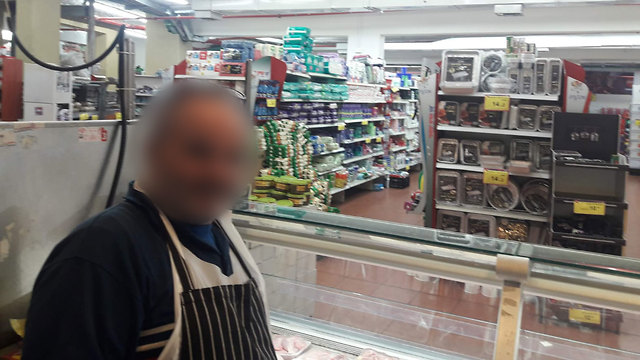 The 50-year-old man, who appears to be a grandson of a Palestinian who helped save Jews during 1929 Hebron massacre, has been held for the past 2 weeks on pretext of assaulting his brother; meanwhile, the man says his siblings mercilessly beat him, while PA police gave him burns on his arms and legs

A Palestinian from the West Bank who converted to Judaism in Israel was inexplicably arrested by Palestinian Authority forces security forces over two weeks ago and has been held in custody ever since. He claims to have been tortured during that time on multiple occasions, which left his limbs badly burned.

The 50-year-old is Hebron resident who worked at a supermarket in the Jerusalem area. He converted on the eve of Rosh Hashanah three weeks ago at a strict Haredi court in the city of Bnei Brak by Rabbi Nissim Karelitz, who passed away on Monday.

Prior to his conversion he studied at Machon Meir Yeshiva in Jerusalem, an institution strongly associated with nationalist politics and settler movement. He was in the process of having his conversion recognized by the Chief Rabbinate of Israel before he was arrested, which would have allowed him to apply for Israeli passport.

On the eve of Yom Kippur, the man traveled to an area of the West Bank under Palestinian security control, just beyond the section of the territory under Israeli security control. There, he was supposed to meet with one of his nine children, who along with their mother are all Muslim.

During the family reunion, a white Skoda vehicle carrying four men approached the 50-year-old. The men got out of the car, dragged the Palestinian into the vehicle and drove away. Later, the man was dropped off at a police station in Hebron by the four.

Haim Perg, the leader of the Jewish community in Hebron, is helping the Palestinian with his legal troubles and according to him, the 50-year-old is the grandson of a Palestinian man who helped save Jews during the 1929 Hebron massacre.

“As far as I’m concerned, he’s like my son, and I will shake up the world for somebody to come and save him,” Perg said. “The man’s grandfather rescued 26 Jews during the events in Hebron. Now that he is in danger, we have a commitment to help him.”

Perg added that he spoke by phone with the Palestinian who told him he was being badly beaten and had even had his hands and feet burned during the torture he’s had to endure.

Perg said he appealed to the Civil Administration for help but since the man is a resident of the Palestinian Authority, they cannot intervene in the affair.

Findings from various sources indicate the official reason for the arrest is a police complaint – filed by the brother of the man – according to which the 50-year-old acted assaulted his brother several months ago.

The Palestinian denies these allegations, claiming his brothers were the ones who mercilessly beat him and told him that he will not be entitled to the family’s inheritance following his conversion to Judaism.

“His brothers must distance themselves from him in order to show that they don’t support the conversion, otherwise they will also suffer greatly,” said attorney Michael Teplow who is associated with the Legal Forum for the Land of Israel, a right-wing, pro-settler group, who specializes in assisting Palestinian who cooperate with Israel.