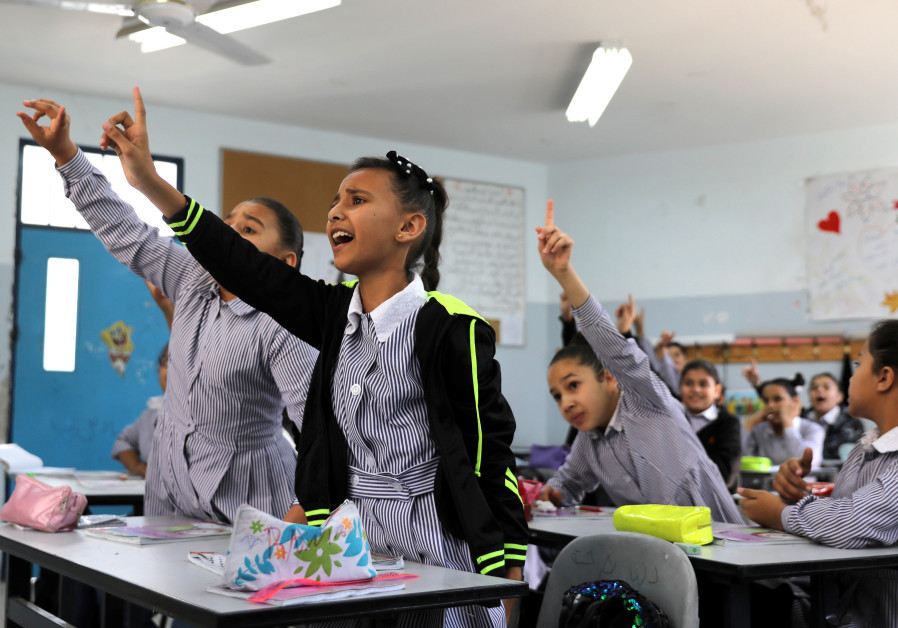 Palestinian schoolchildren are exposed to a dramatic amount of incitement and intolerance against Jews and Israel, a research institute based at the Hebrew University of Jerusalem found.

IMPACT-se describes itself as a “research, policy and advocacy organization that monitors and analyzes education,” according to “international standards on peace and tolerance as derived from UNESCO declarations and resolutions.” The organization studied the current Palestinian curriculum (2019-2020) taught in Palestinian Authority and UNRWA schools in the West Bank, Gaza and east Jerusalem.

The report comes after the PA restructured its curriculum for the first time since 2000, following the Oslo Accords. Previously, school children in the West Bank and east Jerusalem were taught the Jordanian curriculum, while students in Gaza used Egyptian textbooks.

All 2019–2020 textbooks for the first semester were analyzed.

The findings convey a horrific reality, where violent acts, hatred and even “martyrdom” are not only justified but encouraged.

The study found that all textbooks in social studies, history, Arabic and national education for grades two to 12 contained problematic content, defined by IMPACT-se as “violence or incitement to violence; hatred of the other; and radical, inappropriate or disturbing content.”

An 11th grade history book described the 1972 Munich Olympics massacre by Palestinian terrorists in which 11 Israeli athletes were murdered as “a strike at Zionist interests abroad.”

A 7th grade social studies text claimed that “Zionists” tried to burn down Jerusalem’s al-Aqsa mosque in 1969. In fact, an Australian tourist belonging to a Christian fundamentalist sect was responsible for the arson attack.

Apologetic references to violence were found even in science books. An exercise called “The Stones Uprising and Elastic Potential Energy,” reads: “During the Palestinian Stone Uprising of 1987, the youth of Palestine used a slingshot or the ‘shu’ba’ to confront the bullets of the Occupation army soldiers who were breaking into Palestinian towns. The Palestinians had no other means of defending themselves.”

The 8th grade students are asked: What is the “usefulness of shooting stones?”

“The United Nations has just told the PA this August to remove antisemitism in the textbooks following our presentation to them,” said IMPACT-se’s CEO Marcus Sheff. “The European Parliament passed legislation stating its disapproval of the curriculum last year; government officials, ministers and diplomats have presented our findings to the Palestinian Minister of Education and received all manner of assurances. But this week, the school gates opened and the same hateful textbooks are being taught.

“That is a strategic choice made by the Palestinian Ministry of Education to radicalize whole generations of young Palestinians: to encourage them to commit violence, endanger themselves, and to reject peace with Israel,” he added.