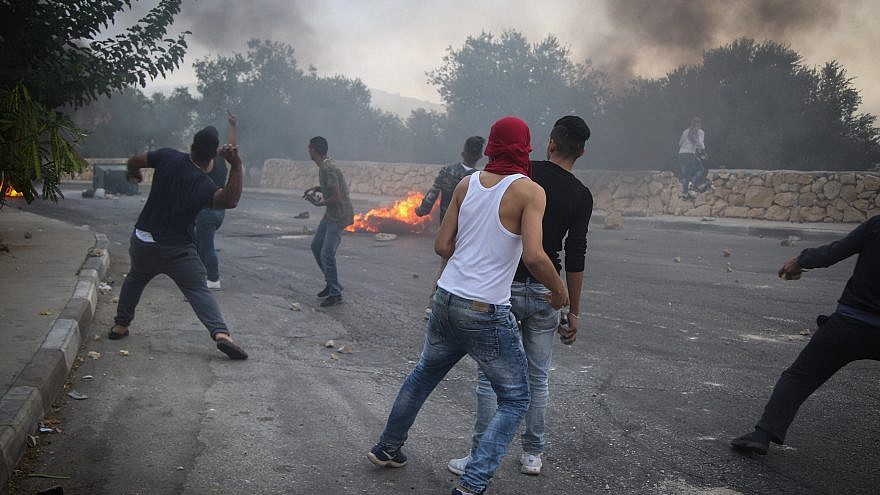 Immediately after the attack, local Arabs began throwing firebombs and other objects at Israel Defense Forces, which responded with riot-control measures.

(October 17, 2019 / JNS) A 20-year-old Arab man from eastern Jerusalem who attempted to run over Israeli soldiers near Ramallah in the West Bank early on Wednesday morning was shot and seriously injured, according to Border Police.

The incident occurred as Border Police were leaving the al-Am’ari camp near Ramallah following a mission to arrest two wanted terror suspects. Ramallah currently serves as the de facto administrative capital of the Palestinian Authority.

According to officers on the scene, a car sped up and collided with an armored vehicle “with the intention of running over combat fighters.”

A passenger inside was identified making suspicious movements and “holding a suspicious object in his hand that turned out to be a knife” and was shot.

He was evacuated to Jerusalem’s Shaare Zedek Medical Center.

Immediately after the attack, local Arabs began rioting, throwing firebombs and other objects at Israel Defense Forces, which responded with riot-control measures.

The incident occurred amid an increase in attacks on Israeli troops.

On Saturday, terrorists attempted a drive-by shooting on forces near Tulkarm, and earlier this month an explosive device was detonated next to an IDF position near Beit Ummar, with a second device neutralized by army sappers.