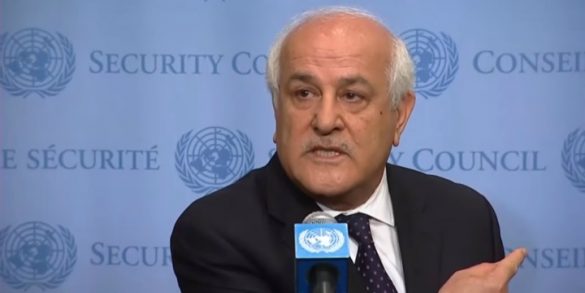 Palestinian Authority Ambassador to the UN Riyad Mansour declined this week to condemn last Friday’s terrorist attack in Halamish — in which three Israelis were stabbed to death at a Shabbat dinner — and instead justified the act.

Addressing reporters at the UN headquarters in New York City, Mansour said, “When you have an occupation with its ruthlessness…then don’t expect all Palestinians to be angels [and] not to react to it.”

“If people think that the Palestinian people are going to live in that situation without any form of resistance to it, that is not realistic and that is not fair,” Mansour went on to assert.

The international community, Danon continued, must demand that the Palestinian Authority “immediately end terror and glorification of violence.”

Watch Mansour’s remarks below (they begin at around the 15:30 mark):