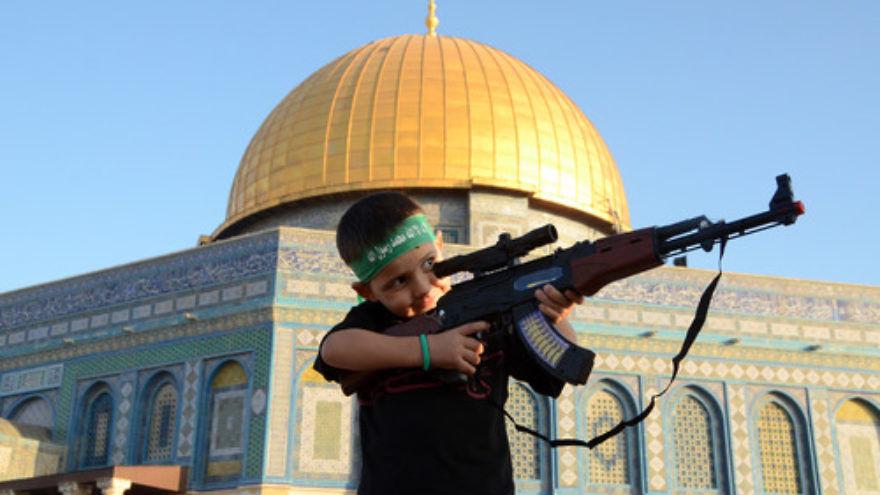 One poem, recited by a girl of around 10 years old, told youngsters they had “the blood of the martyrs” in their veins, reminding them that according to Islam, the 72 virgins of Paradise—“the Dark-Eyed”—are waiting for them, “yearning,” and appreciate them when they die as martyrs.

Another child recited a poem that also stressed the goal of death, stating that “with blood we have woven the shrouds” and that their “soul” was a “gift” for “the homeland.”

The show’s host, Walaa al-Battat, called Israelis child killers and said Palestinian children needed to “be able to defend themselves” against them. She claimed that Israelis “are trying to reach us everywhere in order to kill us,” and that they are “killing children on an almost daily basis.”

In 2015, during the Palestinian “knife intifada,” al-Battat warned Palestinian children not to “walk alone” since “barbaric” Israel’s goal was to kill them.

According to Nan Jacques Zilberdik, senior analyst at media watchdog NGO Palestinian Media Watch, “Aside from being simply sickening, the P.A.’s continuous promotion and endorsement of child martyrdom is diametrically opposed to one of children’s most basic rights—the right to life—as stipulated in the U.N.’s Convention on the Rights of the Child.”

She called on the United Nations to hold the P.A. accountable.

“The P.A. prides itself on having joined this and other U.N. conventions in 2014. Tragically, the government-controlled P.A. TV educates Palestinian children in blatant violation of the very convention it signed. Palestinian Media Watch calls on the U.N. and UNICEF to take action and hold the P.A. accountable for this flagrant child abuse.”