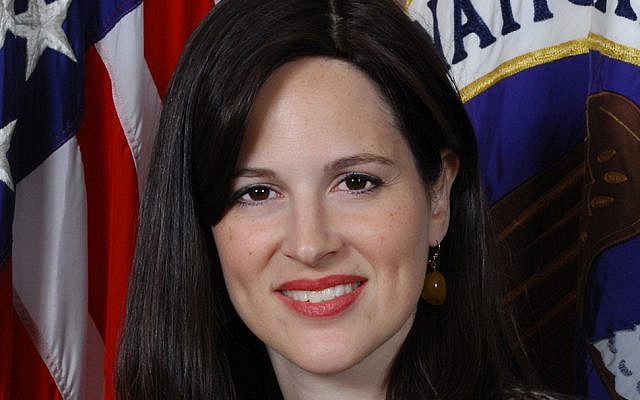 An Orthodox Jewish woman whose parents were among the hostages rescued by Israeli commandos from Entebbe Airport has been tapped to head the United States National Security Agency’s new Cybersecurity Directorate.

Anne Neuberger of Baltimore has worked at the NSA for the past decade. She helped establish the US Cyber Command and worked as chief risk officer, where she led the agency’s election security efforts for the 2018 midterms.

Neuberger said her family’s harrowing escapes, first from the Holocaust and then from the hostage situation in Uganda after the Air France flight her parents were on was hijacked by Palestinian terrorists in 1976, had helped shape her worldview.

Though her parents are not Israeli, they were held by the hijackers for a week along with Israeli passengers because they were Jewish.

“My parents had American passports, but because my father wore a kippah they knew he was Jewish and decided to keep him, too,” she told the Forward in an interview. “A military operation brought my parents home. Sometimes that’s the only option.”

“Threats from those that want to cause us harm are real and not going away. We have a commitment to defending our nation in lawful ways. Our nation needs to remain vigilant when it comes to cybersecurity. The NSA makes critical contributions to protect the nation,” she said.

Neuberger, currently an assistant deputy director at the agency, will be one of the highest-ranking women at the NSA since Ann Caracristi was named deputy director in 1980, according to the Wall Street Journal. Neuberger will report to the agency’s head, Gen. Paul Nakasone.

She previously was the deputy chief management officer at the US Navy and worked for the secretary of defense.

Neuberger, 43, also known as Chani, is from the heavily Jewish Brooklyn, New York, neighborhood of Borough Park, where she attended the Bais Yaakov Jewish day school for girls, according to the Yeshiva World News.

She is a graduate of Touro College in New York and Columbia Business School, and has worked in the White House Fellows program. One the side, she runs a charitable organization helping divorced single mothers in the Orthodox communities.

In her interview with the Forward, Neuberger said that she had encountered few problems related to her religion at the NSA and that she was extremely happy to be seen as a role model for Orthodox women.

“If you are professional in your job and comfortable in adhering to your traditions, everyone will be fine with it,” Neuberger said. “All my coworkers understand that I don’t go out with them for drinks on Friday night and that I observe the Sabbath. In fact, I have assistants who keep their eye on the clock for me Friday afternoons, letting me know that I had better get moving.”

“My 17-year-old daughter, who attends an Orthodox school, went to a career night two weeks ago where religious women in a range of fields — doctors, lawyers, judges — came to speak to them. That would have been unheard of 25 years ago, when I was in high school. And now I want to contribute to that movement and participate in it as much as I can.”

A member of one of the 100 wealthiest families in the United States, Neuberger transitioned from the private sector into government service following the September 11 attacks.

She told The Wall Street Journal that the directorate will more actively use signals intelligence gleaned from expanded operations against adversaries. As part of its mission, the directorate will work to protect the US from foreign threats by sharing insight into specific cyber threats with other federal agencies as well as the private sector.