Operation Good Neighbor: Syrian Thanks Israel for Saving her Life 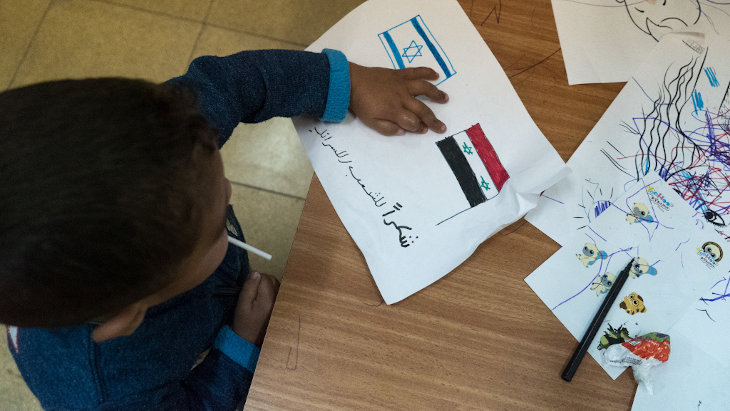 A viral story is drawing attention to Israel’s heroic efforts that saved thousands of Syrian refugees.

Noam Shalev, an Israeli film producer, was recently vacationing in Sweden. While eating in a restaurant in Stockholm, he was served dinner by a young Arab waitress. When it was time to pay his bill, Shalev handed over his Israeli credit card – and his waitress went into shock, dropping the card on the floor, trembling and starting to cry.

“Where are you from?” she asked tearfully, looking at the Hebrew writing on the credit card.

Afraid that his waitress was anti-Semitic, Mr. Shalev started to put on his coat, ready to exit the restaurant quickly. When he answered that he was from Israel, the waitress composed herself. She was from Syria, she explained, and had never met an Israeli. Yet she owed Israel a huge debt of gratitude and wanted to thank her Israeli customer.

Several years ago, back in Syria, the waitress’ mother was gravely ill and lay on her deathbed. An Israeli humanitarian program, Operation Good Neighbor, brought her mother to Israel for medical treatment; after three weeks in a hospital in the northern Israeli city of Safed, her mother recovered. The mother returned home to Syria, and the entire family eventually fled from Syria’s brutal civil war and found asylum in Sweden.

The waitress then picked up her cellphone, called her mother, and handed the phone to Mr. Shalev. “I find myself speaking in mixed English and German with an excited and crying woman, who asked me for only one thing: give thanks to all your brothers in Israel who gave her daughters the privilege of having a mother.” Noam Shalev posted the story on Facebook on January 4, 2020. After it was re-posted in English by Slingshot Israel, a group of former Israeli soldiers who educate the public about Israeli life; within days it had been shared and read tens of thousands of times around the world.

One of the people who read the post was Lt. Col. (Res.) Eyal Dror, the commanding officer of Israel’s Operation Good Neighbor, which coordinated the aid that brought the waitress’ mother – and thousands of other Syrian civilians like her – to Israel for life-saving medical treatment. In an Aish.com exclusive interview, Lt. Col. Dror explained that when he read the story, he realized it meant that Syrians aided by the Jewish state “are not forgetting the State of Israel when we saved their lives. What we’ve done continues to be important and remembered,” shaping perceptions of Israel in parts of the Arab world and beyond.

Israel Aid to Syria
Israel began aiding Syrian refugees near its border after civil war broke out in that country nearly a decade ago. In 2016, humanitarian efforts gained a huge boost with the establishment of “Operation Good Neighbor”, a special unit within the Israel Defense Force (IDF) to oversee aid, including sending medical and other supplies over the border to help Syrian civilians, building and staffing a maternal hospital and a day clinic on the border, and facilitating medical treatment inside of Israel’s world-class hospitals for sick and wounded Syrians.

The program brought nearly 5,000 Syrians to Israel for medical treatment, including over 1,300 children. Lt. Col. Dror says that he cannot forget the stories behind each of the Syrians he was able to help. “To see little children crossing the border into Israel late at night in the very hard winter, to see them crossing barefoot – it can break your heart. I have three little children, and I saw these Syrian civilians like my own children.”

He remembers watching some little Syrian children who’d been brought to Israel for treatment falling down and bumping themselves, yet not crying. Dror couldn’t understand their lack of tears. A Syrian mother explained to him: the children didn’t cry because they’d learned back in Syria that nobody would help them even if they cried.

“I couldn’t imagine a child not crying,” Dror recalls. “It reminded me of stories I’d heard about the Holocaust – a little child knowing that no one would help him even if he cried.”

Injured and ill Syrians were primarily treated in Israeli hospitals in the northern Israeli cities Nehariya, Tiberias and Safed, though Lt. Col. Dror explains that hospitals all across the country participated too, welcoming Syrian citizens for life-saving care. Because the Syrian regime has long demonized Jews and Israelis, many of these civilians who spent time in Israeli hospitals were forced to lie about where they’d been once they returned to Syria. Medicines and other medical equipment had to be altered so that no Hebrew writing was visible so Syrians would not face deadly reprisals back home.

Operation Good Neighbors also helped coordinate humanitarian groups’ aid efforts, helping disparate Jewish, Christian and Muslim charities cooperate and work together. “I don’t know how many times in history a Christian and a Muslim and a Jewish organization cooperated together to help Muslims – all under the command of an Israeli officer,” Dror recalls.

As the IDF ramped up its aid to Syrians, individual Israelis increased their giving as well, donating money as well as hundreds of pounds of clothing, toys, medical supplies, blankets, bedding and other items to civilians on the other side of the border. “Volunteers went home to home in every village in the Golan Heights, collecting donations of clothes and other vital items to help Syrians survive the fighting. The number of people who took part was very large.” Outside of the Golan Heights, other Israeli charities coordinated donations and help across the country.

IDF soldiers helped build a clinic in Syria near the border with Israel. Called Mazor Ladach, which means “relief for the suffering”, over 7,000 Syrians have been treated there. Israel also worked in partnership with Syrian doctors to build and staff a maternal hospital, sending thousands of items of equipment and supplying the hospital with fuel. To date, over a thousand Syrian children have been born in that hospital, kept running in partnership with the Jewish state.

Lt. Col. Dror estimates that he oversaw the transfer of equipment worth nearly 500 million shekels to Syrian civilians – over $144 million. Operation Good Neighbor even supplied nearly $1 million to help run a Syrian bakery and spent about $5 million on the maternity hospital. “We supplied with them with all kinds of help… We supported them during those years which were hard for them” when fighting raged through Syria.

Operation Good Neighbor was forced to stop operations in September 13 2018, after Syrian dictator Bashar Assad regained control of Syrian territory near Israel’s border, where the humanitarian operations had been running. Helping civilians became too dangerous.

One of Operation Good Neighbor’s last acts was the daring rescue of Syria’s “White Helmets” civil defense group on the night of June 21, 2018. The White Helmets consisted of US-trained and Canadian-trained volunteer medical and other emergency personnel and helped evacuate civilians from conflict zones and provide medical treatment. Bashar Assad labeled the White Helmets as traitors and terrorists, and in June 2018 they found themselves under attack, at risk of massacre, until Israel stepped in to save the volunteers and their families.

After the White Helmets exposed that the Assad’s regime was using poison gas on its people they were targeted for elimination. “One night we opened the gate between Israel and Syria, a potential flash point for attacks, for ten hours – that was a huge amount of time given the ferociousness of the fighting,” Lt. Col. Dror says. White Helmet volunteers and their families poured through the border, finding refuge in Israel. “422 people crossed into Israel that night, including babies and children.” The White Helmet volunteers and their families were eventually resettled in Europe, Dror explains, where they continue to tell the story of their dramatic rescue by Israel.

For Lt. Col. Dror and many of the people who helped him aid Syrians, Operation Good Neighbor isn’t really over. “The most important thing in my life was these three years that changed the lives of thousands of Syrians,” Lt. Col. Dror explains.

He insists that even though today Israel is no longer able to run the programs aiding civilians as openly as it once did, the fact that in Syrians’ hour of need Israelis came to their help has changed people’s minds about the Jewish state. “Syrians were educated to hate us as propaganda under the Assad regime. Today, they know that the only country that stood with them: Israel.”

Speaking with Aish.com, Noam Shalev, who wrote the viral Facebook post, echoed this sentiment. “I hope that people can learn from this experience that behind the politics and propaganda, it’s all about people. The only way to make the world a better place is to be better. I think that every Israeli and every Jew should be proud of the way Israel treated the Syrian refugees.”

Lt. Col. Dror keeps a picture in his office that a nine-year-old Syrian girl drew for him. She showed up one day at the border fence with Israel, suffering from diabetes. Israeli soldiers quickly transported her to an Israeli hospital where she received life-saving treatment. “The doctor said if she’d waited even another 24 hours, she would have died,” Dror recalls. When she was well enough to go home, the little girl first made a present: a picture of the Israeli flag, as well as her name in Arabic, then a heart, then Lt. Col. Dror’s name in Arabic. “Can you imagine a Syrian girl that drew a heart to an IDF officer who saved her life?” Dror asks; “This was when imagination became true reality.”

“There are many more stories like the Syrian waitress in Stockholm,” Lt. Col. Dror notes, “of ordinary Syrians who grew up thinking that Jews and Israelis were monsters, and now are proclaiming to the world the many ways that Israel helped them in their hour of need.”