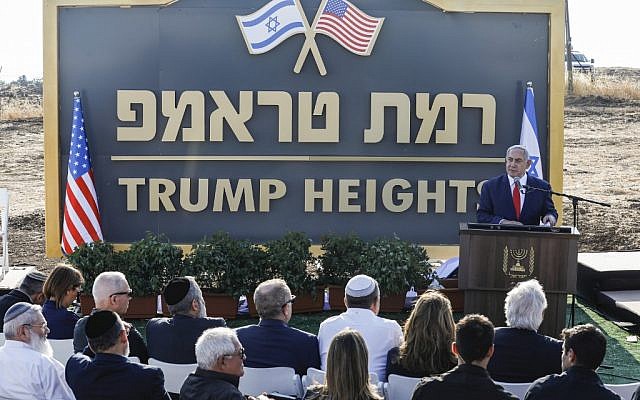 An Israeli cabinet minister on Sunday said the government approved plans to build a new village on the Golan Heights named after US President Donald Trump.

Settlements Minister Tzipi Hotovely wrote on Facebook that her ministry will start preparations for Ramat Trump — Hebrew for “Trump Heights” — to house 300 families.

Israel captured the Golan Heights from Syria in the 1967 Six Day War and annexed it in 1981, a move not recognized by most of the international community.

But Trump signed an executive order recognizing the strategic mountainous plateau as Israeli territory in March 2019. The move came during a visit to Washington by Prime Minister Benjamin Netanyahu just weeks before Israel’s April election. The decision, just one of several diplomatic moves benefiting Israel, was widely applauded in Jerusalem.

The government’s approval of the plan, which according to Hebrew-language media will involve earmarking NIS 8 million ($2.3 million) for developing the town, advances a project announced by Netanyahu last year with great pomp and fanfare. Sunday’s announcement coincided with Trump’s birthday, although it was unclear if it was connected.

Netanyahu recognized Trump’s birthday in a tweet lauding the US president as “an INCREDIBLE friend to Israel.”

Last June, Netanyahu convened the Israeli cabinet in the small hamlet of Qela for a vote on rebranding the community as a gesture of appreciation for the US president’s recognition of Israeli sovereignty over the Golan Heights.