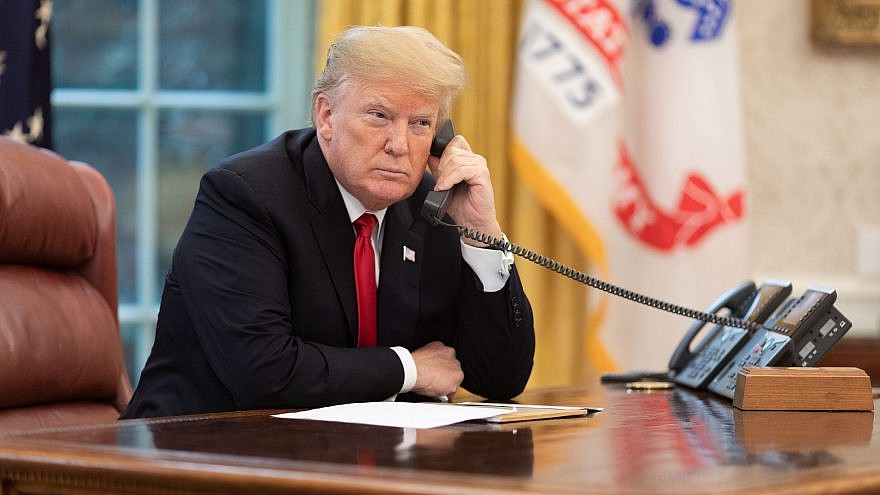 (September 27, 2019 / JNS) In the annual call on Friday ahead of the Rosh Hashanah holiday between Jewish communal leaders and the president of the United States, U.S. President Donald Trump recalled a friend telling him that neither moving the U.S. embassy to Jerusalem in May 2018 nor recognizing Israel’s sovereignty over the Golan Heights last March was his greatest accomplishment to benefit the Jewish people, two participants on the call told JNS.

The greatest accomplishment, this friend told Trump, was withdrawing from the Iran nuclear deal in May 2018, according to the participants.

On the brief call, which was closed to the press, Trump reiterated his desire not to go to war with Iran, but that the United States is ready to act. He touted the administration’s sanctions policy towards the regime, according to the participants.

Since withdrawing from the 2015 accord, the United States reimposed sanctions lifted under Iran, in addition to enacting new financial penalties against the regime.

In his speech on Tuesday at the annual U.N. General Assembly, Trump called on the international community to take action against the threat from Iran.

“All nations have a duty to act. No responsible government should subsidize Iran’s blood lust,” he said. “As long as Iran’s menacing behavior continues, sanctions will not be lifted. They will be tightened.”

The president acknowledged the Holocaust survivors on the phone and went on to note his pro-Israel accomplishments, in addition to denouncing anti-Semitism and expressing his appreciation for Jews contributing to American life, according to the participants. He mentioned the appointment earlier this year of U.S. Special Envoy for Monitoring and Combating Anti-Semitism Elan Carr, who was on the call and briefly talked about his latest trip to Europe, furthering his cause to fight hatred of Jews around the world.

This, despite Trump last month accusing Jews who vote for Democrats as being “disloyal to Jewish people” and “very disloyal to Israel.”

Trump took two questions, according to three participants on the call.

The first one was from former Republican Jewish Coalition chairman and Minnesota Sen. Norm Coleman about Iran.

In response to the second question, from Hadassah president Ellen Hershkin, the president said that Holocaust education should be taught in public schools, according to one of the call participants.

Earlier this year, the Never Again Education Act was introduced in both chambers of Congress.

If enacted, it would create a grant program at the U.S. Department of Education to enable teachers across the United States the resources and training necessary to teach students about the Holocaust and its lessons.

Hershkin nor Trump mentioned the legislation, according to a participant on the call.

This year’s call included at least a couple major left-wing Jewish religious organizations, including the Union for Reform Judaism and the Rabbinical Assembly, the international association of Conservative rabbis, despite the divide between them and Trump.

Such tension has stemmed from Trump’s controversial rhetoric, such as the “disloyal” remarks, to policies on immigration, gun violence and what at times seemed like a soft response to white nationalism, despite being hailed by the pro-Israel community as the friendliest U.S. president yet towards the State of Israel.