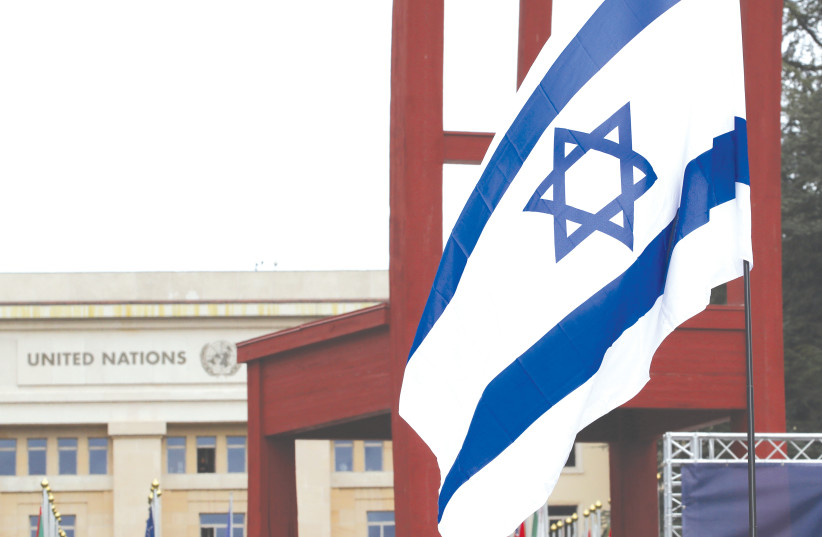 Amid a negative drumbeat of reports about the country hurtling toward a third election within the year, Iran racing to encircle Israel, and antisemites either vandalizing Jewish graves or saying that Israel is “built on the idea that Jews are superior to everyone else,” there was actually some positive Israel-related news this week.

It started early in the week, when Foreign Minister Israel Katz revealed in a radio interview that an Israeli delegation was in Washington to promote the idea of a nonbelligerency pact between Israel and a number of Persian Gulf countries.

According to a later report on Channel 13, the US has approached the UAE, Bahrain, Oman and Morocco to promote normalization of ties, with a nonbelligerency pact being a middle point between no relations and full diplomatic ties. Katz, in a later interview, said he was not excluding Saudi Arabia from this list as well.

Katz first broached the idea at the UN in September, as a way to bring out into the open the cooperation that is already taking place under the radar between Israel and the Persian Gulf states. The talks in Washington are a sign that it is not just an empty idea, but, rather, one that is being discussed at the highest levels.

US Secretary of State Mike Pompeo, who met Prime Minister Benjamin Netanyahu in Lisbon on Wednesday night, was scheduled on Thursday to fly to Morocco and meet with King Mohammed VI, where this issue was expected to be raised.
That was one piece of good news.

Another small morsel came on Tuesday, when visiting Irish Foreign Minister Simon Coveney, on his fourth visit to Israel in the last three years – reflecting his country’s almost obsessive interest in the Israeli-Palestinian issue – declared in an interview with the KAN public broadcaster that his government has essentially frozen a particularly nasty piece of anti-settlement legislation that was snaking through the Irish parliament.

This legislation had nothing to do with labeling settlement goods, already well established in Ireland, but would actually make it illegal – punishable by fines of up to €250,000 or five years in jail – for selling or buying settlements goods. That means that a merchant in Dublin could go to jail for selling dates from the Jordan Valley, beauty products from the Dead Sea, or wine from the Golan Heights.

This proposed legislation singles out Israel in a manner not done to any other country in the world involved in a territorial conflict, and would provide a strong tailwind to Boycott, Divestment and Sanctions movement activists everywhere.
Coveney’s rationale for his government freezing the bill had nothing, however, to do with the particularly ugly nature of a bill criminalizing trade with Jews, but, rather, was a legalistic argument that the legislation was not in line with European Union trade policies.

Whatever the reason, the bill is stuck – a sign that when Israel wants to fight against something, and it has fought against this bill discreetly for months, it knows how to do so.

“For some years now, France, the whole of Europe, but also almost all Western democracies are facing a rise in antisemitism,” the resolution states. “Anti-Zionist acts can at times hide antisemitic realities. Hate toward Israel due to its perception as a Jewish collective is akin to hatred toward the entire Jewish community.”

The good news is that the resolution passed, 154-72. The bad news is that there are 577 deputies in the National Assembly, meaning that only 39% of the deputies showed up for a vote that had triggered a considerable amount of public debate in France over the last few weeks.

And it is not as if the missing deputies were out of the country. France’s public radio service Radio France Internationale reported that fully 550 deputies were present in the building for an earlier vote on the social security budget. Those deputies, apparently, simply were not willing to take a stand on this issue.

Nonetheless, the resolution passed, a sign that noxious anti-Zionism can be challenged, and parliamentary means can be used to send public signals about it. That same day, however, 107 more Jewish graves were found dabbled with swastikas and antisemitic graffiti in an old Jewish cemetery near Strasbourg.

If France is not reflexively perceived by most Israelis and Jews as a place where pushback will emerge at a governmental level toward the delegitimization of Israel, the International Criminal Court in The Hague is even a less likely location.

Yet there, too, Israel registered a victory of sorts on Tuesday when – for the third time – the court’s chief prosecutor, Fatou Bensouda, refused to open an investigation into the 2010 Mavi Marmara incident, during which 10 Turks were killed on a flotilla trying to break Israel’s naval blockade of the Gaza Strip.

While there are two other high-profile cases pending before the court accusing Israel of war crimes – one dealing with 2014 Operation Protective Edge in Gaza, and the other with the settlement enterprise – this decision shows that even in a body as politicized as the International Criminal Court, a favorite venue for Palestinians in conducting “lawfare” against Israel, their victories are not guaranteed.

And if the ICC is the favorite place for Palestinian lawfare, by far their greatest venue for diplomatic battle is the UN General Assembly. There, as the old saying goes, the Palestinians could – because of their automatic majority of Arab and nonaligned states – get a resolution passed saying the sun rises in the west.

But there, too, a slight new breeze was felt this week when 11 EU countries, plus Latin America powers Colombia and Brazil, voted against a resolution that has passed without a hiccup since 1977 establishing a “Division for Palestinian Rights” inside the UN’s Secretariat, a division that essentially just promotes the Palestinian narrative through the convening of seminars and conferences and the publication of booklets and other materials related to the conflict.

That the 11 EU countries – led by Germany and the Czech Republic – broke with the EU’s pattern of abstaining on this measure is, according to Israeli officials, a harbinger of changes in the voting patterns of states at the UN toward Israel.

This change stems in large part from a strong US position against the blatant anti-israel bias in the world body. But it is also due to improved relations Israel has with numerous countries which are benefiting from these relations, and because more and more countries are less fearful of being economically penalized by Arab countries for cooperation with Israel.

It is now tough, for instance, for Saudi Arabia to threaten economic sanctions against a country siding with Israel on a UN vote, since Riyadh itself – as is well known – is cooperating with the Jewish state, even if only deep in the closet.

Even with a significant number of EU countries voting against the resolution, it still passed handily. But, as Yinam Cohen, the director of the Foreign Ministry’s UN Political Affairs Department, told The Jerusalem Post – the vote is a “significant first step in the long way to change the bias against Israel at the UN.”

Again, just a baby step, not a huge stride, but a start.

The same could be said about a letter Germany, France and the United Kingdom sent to UN Secretary-General Antonio Guterres on Wednesday saying that “Iran’s development of nuclear-capable ballistic missiles” runs contrary to a UN Security Council resolution calling on Iran not to develop such missiles.

“France, Germany and the United Kingdom assert once again our firm conclusion that Iran’s development of nuclear-capable ballistic missiles and related technologies is inconsistent” with the missile provision in the 2015 UN Security Council resolution that endorsed the Iranian nuclear deal, the letter read.

The UN Security Council is to convene a meeting to discuss implementation of the resolution on December 19.
This letter is significant because it puts on record before that meeting that the three EU powers that were part of the nuclear agreement – and have worked to bypass current US sanctions on Iran – have accepted both American and Israeli arguments that the Iranian ballistic missile program is alive and kicking.

This letter is, of course, a far cry from sanctioning Iran as hard as the US or Israel would like to see, but it is another signal that emerged this week showing that despite how it sometimes feels, not all the trends in the international community regarding Israel are going in the wrong direction.