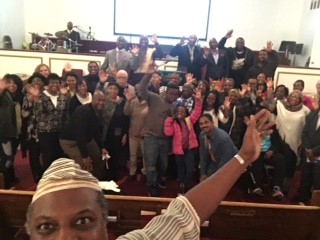 Pastor Dumisani Washington, CUFI’s National Diversity Outreach Director was the keynote speaker. He cited the vision God gave Pastor John Hagee to start this Christian advocacy group called CUFI with about 400 pastors from across the USA, that has now grown to become the largest pro-Israel Christian movement in the world with about 3.8 million members. He cited CUFI on Campus, the Israel Collective, Mizrahi Project, The Watchman and tours to Israel as some of the ways CUFI carries out her vision. He accentuated the importance of Christians supporting Israel, but more so, African Christians and countries, to help curb the biased resolutions against Israel at the United Nations, and gain more support for Israel at the AU (African Union) and ECOWAS (Economic Community of West African States). He said it was worth noting that even Prime Minister Benjamin Natanyahu of Israel has prioritized these relationships by his exclusive meeting with presidents of African countries at the United Nations, by his visits to some African nations, and attending a meeting with presidents from West African countries at the ECOWAS meeting held in Liberia this year.

The little over forty Christians and Jews in attendance were very receptive to the message and vision, and later lifted a special offering to support CUFI on Campus ministry.  The program was moderated by Rev. Dr. Calvin Birch, Pastor of Lighthouse International Church, and benediction was said by Bishop Emmanuel Peters, both of whom are beneficiaries of CUFI’s pastors’ tour to Israel.