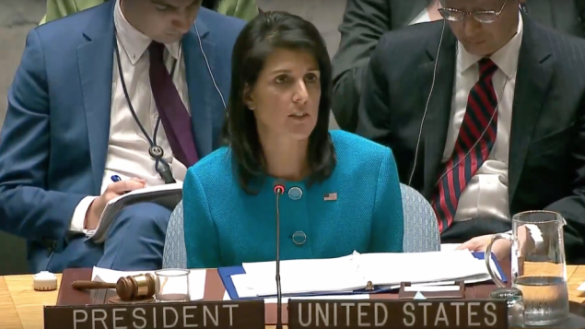 UNITED NATIONS — It’s high time the United Nations Security Council set its sights on Iran, rather than Israel, United States Ambassador to the UN Nikki Haley said Thursday during the Security Council’s monthly meeting on “the Situation in the Middle East, including the Palestinian question.”

“Every month the Security Council convenes a meeting on the Middle East. We have lots of meetings on specific countries and conflicts in this region but this debate is our opportunity to talk about the Middle East as a whole. Regrettably, these monthly meetings routinely turn into Israel-bashing sessions. That’s the way the Security Council has operated for years. It’s a formula that is absurdly biased against one country. It’s a formula that is painfully narrow in its description of the conflicts in the region,” said Haley, who is this month’s president of the Security Council.

In her remarks before the 15-member council, Haley condemned Iran, which she said is responsible for regional tumult, from meddling in Yemen and Syria, to its support of Hezbollah.

“Iran is using Hezbollah to expand its regional aspirations. That is a threat that should be dominating our discussions at the Security Council,” she said.