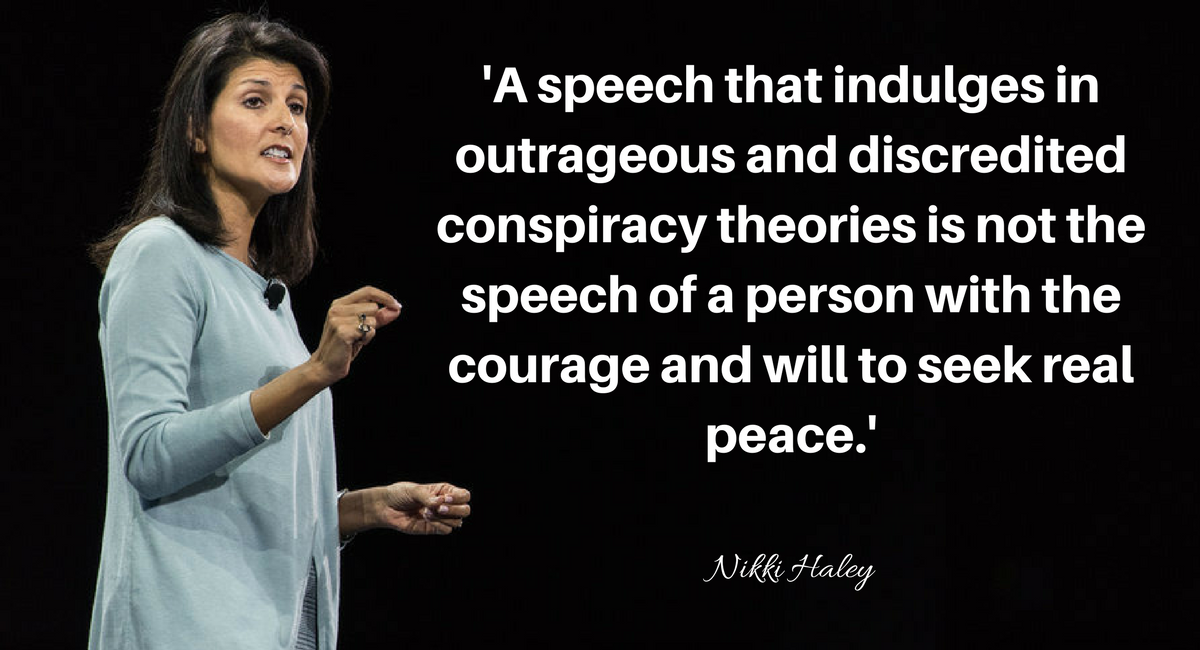 U.S. Ambassador to the U.N. Nikki Haley launched a broadside Thursday at Palestinian Authority President Mahmoud Abbas, accusing him of indulging in “outrageous” conspiracy theories about Israel and lacking what is needed to secure peace in the region.

Haley made the remarks at a meeting of the U.N. Security Council on the Middle East. She pointedly contrasted Abbas with leaders like the late Egyptian President Anwar Sadat, whom she cited as a leader “willing to step forward, acknowledge hard truths, and make compromises.”

“Where is the Palestinian Anwar Sadat?” she asked.

She cited a speech earlier this month in which Abbas tore into Israel and the U.S., rejecting any American role in talks.

“We will not accept for the U.S. to be a mediator, because after what they have done to us — a believer shall not be stung twice in the same place,” Abbas said, according to The New York Times.

Responding to U.S. threats to pull funding for the Palestianian Authority, he said: “Damn your money.”

‘A speech that indulges in outrageous and discredited conspiracy theories is not the speech of a person with the courage and will to seek real peace.’

“He rejected any American role in peace talks. He insulted the American president. He called for suspending recognition of Israel,” Haley said. “He invoked an ugly and fictional past, reaching back to the 17th century to paint Israel as a colonialist project engineered by European powers.”

“A speech that indulges in outrageous and discredited conspiracy theories is not the speech of a person with the courage and will to seek real peace,” she added.

She said that while the U.S. was “eager” to pursue peace, “we will not chase after a Palestinian leadership that lacks what’s needed to achieve peace.”

At the session, Palestinian Ambassador Riyad Mansour attacked the decision by the U.S. to recognize Jerusalem as Israel’s capital and move its embassy there as “null and void.”

“We remain insistent on respect for the law and our rights, and we reject this unilateral, provocative decision, which directly contravenes the Charter and U.N. resolutions on the matter. This decision is null and void and has no legal effect on the status of Jerusalem,” he said.