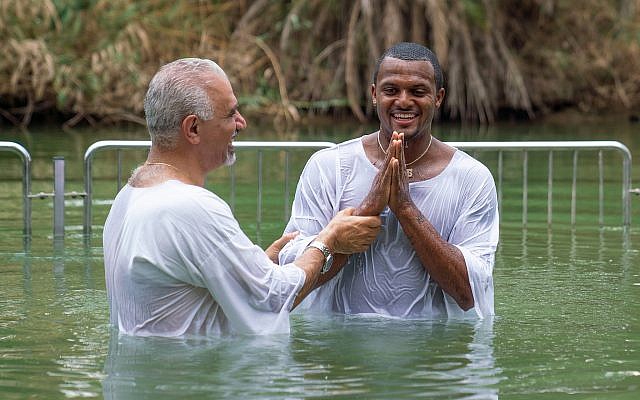 Houston Texans star quarterback Deshaun Watson toured Jerusalem Thursday and said that while he’d had no expectations before his first trip to Israel, after only a few days the visit already had a major impact on him.

“It’s definitely a life-changing experience for you to really feel the energy of Israel and especially Jerusalem,” Watson said during a stop at the Tower of David Museum in Jerusalem’s Old City. “It’s made my spiritual side a lot stronger.”

Asked if he might come back in the future to play football in Israel, Watson was affirmative. “I hope so, that’s the plan. Hopefully I can bring some type of football games over.”

Although he has been practicing for months, Watson took a break from football to make the trip before the Texans training camp opens on July 25. A devout Christian who wanted to see Israel first-hand, he arrived on Tuesday with a small entourage for a private tour co-sponsored by America’s Voices in Israel, a US group that organizes week-long missions to Israel for prominent Americans.

After waking up and working out at his Tel Aviv hotel early morning, Watson is whisked around the country to see key sites and Christian holy places such as the Jordan River, where he was baptized on Wednesday.