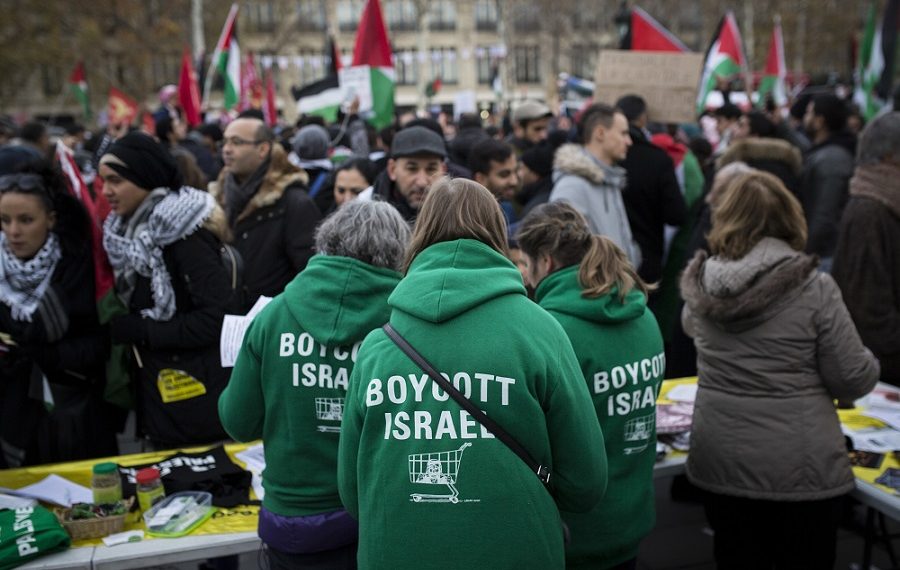 A new comprehensive report about the history and current state of the Boycott, Divestment and Sanctions Movement – more commonly referred to as BDS – was released on Monday by the Foundation for Defense of Democracies.

The 44-page monograph, “War By Other Means: A History of Anti-Israel Boycotts, From the Arab League to BDS,” by FDD research analyst David May, “details how despite framing itself as a social justice movement, BDS is the most recent iteration of a century-old effort to attack the legitimacy and economic viability of the Jewish state and its precursors,” said the Washington, D.C. think tank in a statement.

“There are many good reports out on BDS, but ours is the most comprehensive report covering BDS’s evolution from the Arab League boycott [in the 1940s] into its modern infrastructure, while detailing how the BDS campaign operates,” May told Jewish News Syndicate in an interview.

“BDS is more of a propaganda battle with the desire of achieving long-term economic gains if it can turn Israel into a pariah state,” he said. “The threat of effective BDS right now is minimal, but if its message persuades a new generation of activists who will become social and political leaders, the movement could have a lot more bite.”

In the report, May elaborates on BDS being promoted in multiple spaces, including but not limited to NGOs, Jewish groups, African-American groups and on college campuses.

However, “DSA hasn’t been an active campaigner or influencer on BDS, and they aren’t mainstream, so their role in expanding BDS is limited,” May told JNS.

May’s report mentions efforts by Congress to combat BDS, including proposed legislation targeting non-state actors that partake in the movement, as legislation to combat states has already been enacted.

Arab countries that have sought to improve relations with the Jewish state include Oman, Morocco, Bahrain and the United Arab Emirates.

May mentioned to JNS that since “a group of Arab intellectuals convened in late 2019 to articulate their opposition to boycotts and exclusions of Israel … we are in a new era for regional integration and BDS is unlikely to deter that.”

The monograph mentions that US courts have ruled anti-BDS measures, which have been enacted by 28 states – South Dakota becoming the latest on Jan. 14 – to be constitutional. These measures combat BDS “whether by preventing state investment, barring state contracts, or otherwise prohibiting the use of state funds for companies boycotting Israel,” according to the report.

“Anti-BDS laws seek to extend these protections to American companies similarly threatened by the BDS campaign,” May told JNS. “Further, First Amendment protections for BDS are limited because the anti-Israel boycott is a matter of foreign policy, and the boycotts are commercial speech, which can be more easily regulated.”

Its goal? Destruction of the world’s only Jewish state

Towards the end of the report, May lists seven policy recommendations for the US government to combat BDS.

These include, but are not limited to, America pressuring international organizations that receive US funds to reject BDS; US government agencies determining “whether nonprofit organizations that receive US government grants are engaging in politically motivated boycotts of Israel or Israeli companies,” as previously, the US Agency for International Development “has failed to evaluate properly whether grant recipients were engaging in BDS activity;” and state and local governments continuing to “pursue anti-BDS resolutions and laws to prevent public sector investments from benefiting entities that promote commercial boycotts of Israel.”

May also recommends that the US Treasury and Department of Commerce “should vigorously implement their authorities under current US anti-boycott laws.”

Overall, he told JNS, “The main takeaway from the report should be that BDS is the most recent manifestation of a century-old campaign to eliminate Israel by way of economic means. While BDS and its leaders speak about social justice and human rights to attract well-intentioned supporters, its goal is clearly the destruction of the world’s only Jewish state. The ramifications, if BDS were to succeed, would be devastating to the nearly half of world Jewry living in Israel.”