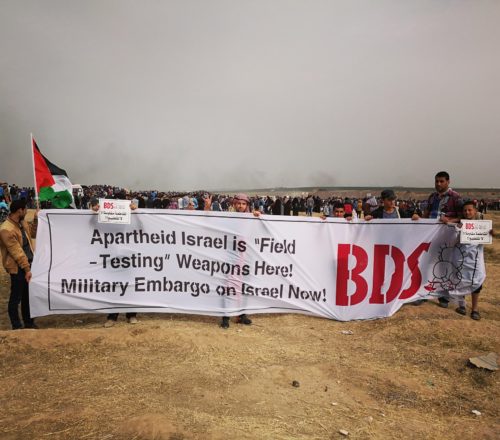 (May 29, 2019 / JNS) In the wake of Iceland’s pro-Palestinian gesture at Eurovision and related discussion promoted by the Palestinian Academic and Cultural Boycott of Israel (PACBI), Dan Diker and Adam Shay of the Jerusalem Center for Public Affairs have published an English book titled The PACBI Deception: Unmasked.

The book reveals PACBI’s intentions of political warfare against Israel, illustrated by the movement’s links to terror groups, and calls out the movement for “masquerading as human rights.”

According to Diker, project director for the Program to Counter Political Warfare and BDS at the JCPA, PACBI is an “anti-Semitic organization that sits with five designated terror organizations together on the BDS national committee in Ramallah.” PACBI, he explained, “exploits international figures, groups and activists to achieve its own Palestinian anti-Semitic and terror linked goals of destroying Israel.”

While masquerading as a grassroots coalition of European and American pro-Palestinian organizations that rally for justice, equality and human rights, Diker told JNS, “in fact, PACBI is not pro-Palestinian at all.” He said “their goal is not to establish two states but to replace Israel through non-military means, pursuing the same goals as Hamas and Islamic Jihad, and accusing Israel of being an apartheid entity that should not exist.”