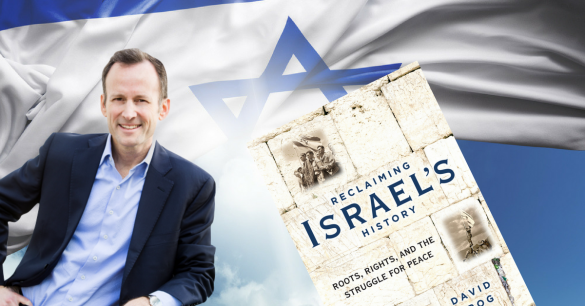 “Those who cannot remember the past are condemned to repeat it,” wrote philosopher George Santayana in 1905. Today, Western civilization’s impaired memory is only part of a bigger problem.

From the United Nations to university campuses, when history conflicts with progressives’ agenda, they simply change the past. Disparate leftist forces, banded together by “intersectionality,” stake their legitimacy on a history they’ve revised to suit their purposes.

No past is more under siege than the history of the Jewish people and their connection to the land of Israel. While countless books have been written on Judaism’s connection to the Holy Land, author David Brog’s recent release, “Reclaiming Israel’s History: Roots, Rights, and the Struggle for Peace,” may be the most important book on the subject written in a post-9/11 world.

Full disclosure: I have interviewed Mr. Brog numerous times in his capacities as founding director of Christians United for Israel (CUFI) and executive director of the Maccabee Task Force. I have always found his no-holds-barred perspective refreshingly honest. It’s that same approach to his writing that makes this book so gripping.

Beginning with the first chapter, “The Jewish Claim,” Brog captures the reader’s interest by dispelling a widely accepted myth. He addresses the 70 A.D. rebellion against Rome and how the Jewish revolt resulted in the death, enslavement and exile of hundreds of thousands of Jews, thus beginning “an exile of the Jewish people from their ancestral homeland that would last almost 2,000 years.”

Noting “a certain romance to this story,” Brog piques the reader’s interest by adding, “There’s just one problem: it isn’t true.” He goes on to clarify that the Romans did massacre, enslave and exiled hundreds of thousands of Jews, yet “even after the Romans had done their worst, millions of Jews remained in their land. These Jews would continue to cling to their native soil—and constitute a majority in it—for many centuries to come. There was no 2,000-year separation.”