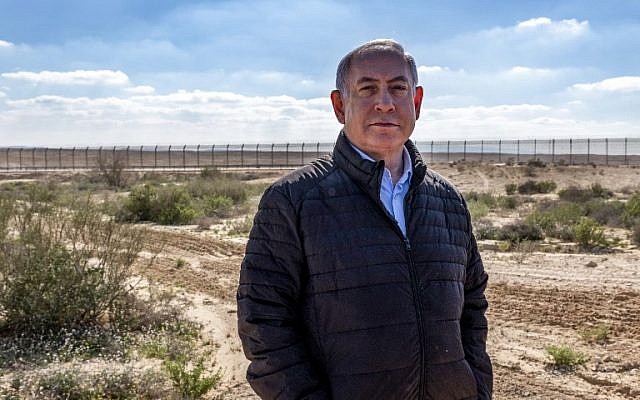 Prime Minister Benjamin Netanyahu on Thursday toured the security fence along the Egyptian border, where he warned the Hamas terror group that Israel would respond harshly to any further violence emanating from the Gaza Strip.

At the Egyptian border, Netanyahu, who is also defense minister, was briefed by army officials and held a discussion with Chief of Staff of the Israel Defense Forces Aviv Kohavi and other top generals on the situation on the Gaza border, which has seen several flare-ups over the past week.

Netanyahu said he was “aware that in the last few days Hamas’s aggression is renewing in all sorts of forms.”

“Hamas should understand that any display of aggression will be met with twice as great a response from the Israeli side,” Netanyahu told reporters.

“It is better they understand this now than afterwards,” he added.

Earlier Thursday, an IDF tank shelled a Hamas post in the northern Gaza Strip after Palestinian gunmen fired on an Israeli military position along the border fence, the army said. No Israeli soldiers were said injured by the gunfire.

Hebrew-language media said the target was an IDF pillbox, which is a concrete structure that offers protection against rifle fire.