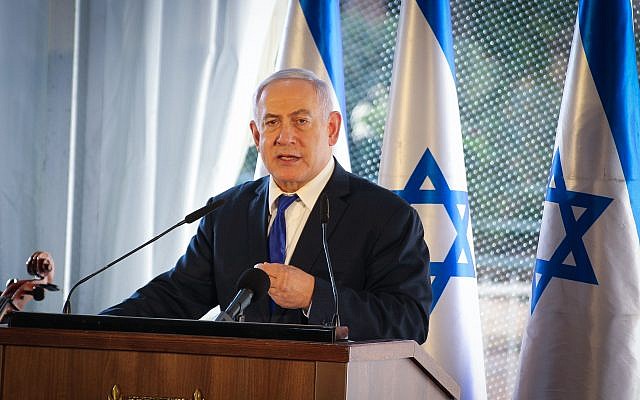 PM says Israel will respond forcefully to any attempt to harm citizens, soldiers after drone attack, rocket fire from Gaza

Prime Minister Benjamin Netanyahu warned Palestinian terror group Hamas on Saturday that Israel would respond forcefully to any attempt to harm its citizens and soldiers, following two days of violent incidents on and near the Gaza border.

“Hamas is responsible for all aggression emanating from the Gaza Strip. Any attempt to harm our citizens and our soldiers will be met with a forceful response,” Netanyahu said in a statement.

The warning came after a particularly violent weekend in the Gaza border area.

Earlier Saturday, Gaza terrorists piloted an armed drone into Israel, the Israel Defense Forces said. It did not specify if the explosive detonated, but said a military vehicle was lightly damaged in the incident.

The IDF said it opened fire at the cell responsible for the drone. No Israeli soldiers were hurt and there were no immediate reports of Palestinian injuries.

On Friday night, incoming rockets set off sirens in Israeli communities along the Gaza border. The IDF said it had identified five projectiles that had crossed the border into Israeli territory.

The exchange of fire came hours after two Palestinian teens were reportedly killed in clashes with Israeli troops along the border, in what the IDF called “especially violent” riots.

The Hamas-run health ministry identified one of those killed as 17-year-old Ali al-Ashqar. It said he was shot in the neck in the northern Gaza Strip. A second teenager was shot in the stomach east of Gaza City, the ministry said, later identifying him as Khaled al-Rabaee, 14.

The IDF had no immediate comment on the deaths but said some 6,200 Palestinians took part in the weekly “March of Return,” including hundreds who rioted.

The riots were especially violent and included the throwing of a large number of explosive devices, hand grenades and firebombs at the fence and IDF soldiers, the army said, adding that there were extensive attempts to damage the border barrier.

The deadly clashes came just days after Israel lifted restrictions on fuel deliveries to Gaza, a week after curbing them by half due to rocket and mortar fire from the coastal enclave.

Since the outbreak of protests on the Gaza border last year, Israel has intermittently taken a number of steps to curb outbreaks of violence from the coastal territory, such as closing border crossings, cutting fuel shipments and reducing the permitted fishing area off the coast of the Strip. It has rolled back such moves following decreases in violence.

A deal was brokered several months ago by UN and Egyptian officials to end several violent flare-ups in recent months between Israel and Hamas, which have fought three devastating wars since 2008, and to help stabilize the territory and prevent a humanitarian collapse.