Netanyahu tells Christian leaders: Stand with the truth about Israel 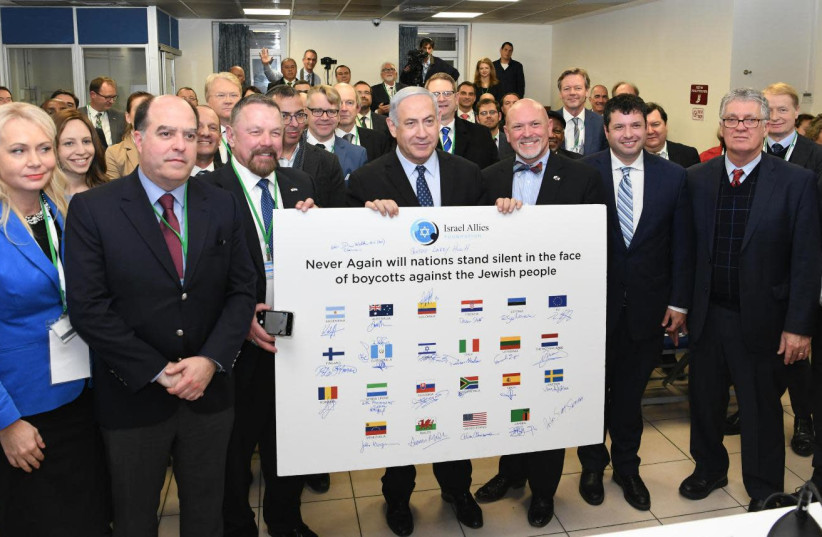 The friendship between Jerusalem and pro-Israel Christians is based on shared values, Prime Minister Benjamin Netanyahu said in a meeting with lawmakers from 25 countries on Monday.

Netanyahu told the parliamentarians that the truth is on their side.

“Even when Israel is under attack and defamed, you know the truth. There is no replacement for the truth when facing lies,” he stated.
In addition, the prime minister praised US Secretary of State Mike Pompeo’s announcement that the US no longer considers settlements to be illegitimate.

“We are not occupiers in a foreign land. This is our homeland since Abraham the Patriarch came here 3,500 years ago. The word ‘Jew’ comes from ‘Judea,’” Netanyahu said.

The IAF delegation gave Netanyahu a signed declaration stating that “never again will nations stand silent in the face of boycotts against the Jewish people.” The petition was a response to the European Court of Justice’s decision to label products from east Jerusalem, the West Bank and Golan Heights as not being from Israel.

The MPs came to Jerusalem for three days to take part in the Israel Allies Foundation’s annual conference. Among attendees are the foreign minister of Venezuela, Julio Borges; the population minister of Estonia, Riina Solman; and the president-elect of Guatemala, Alejandro Giammattei.

Many of these parliament members serve as chairmen of the Israel Allies Caucuses in their parliaments and advance pro-Israel legislation and combating anti-Zionist or antisemitic bills.

The Israel Allies Foundation works with the US Congress and parliaments around the world to mobilize faith-based support for Israel. Most of its participants are Evangelical Christians.