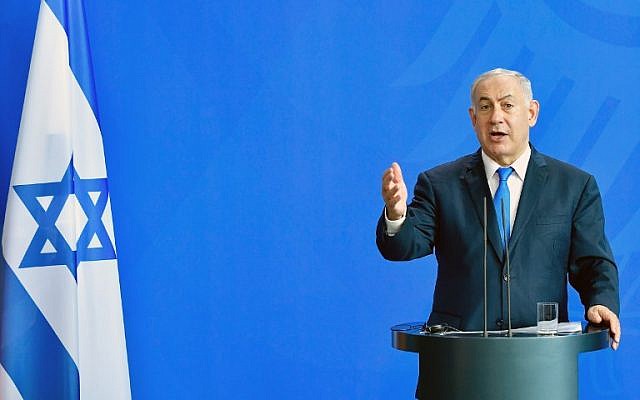 Prime Minister Benjamin Netanyahu said Tuesday that a newly announced plan by Iran to increase its nuclear enrichment capacity was aimed at producing nuclear weapons to be used against Israel.

“Two days ago, Ayatollah Khamenei, Iran’s supreme leader, stated his intention to destroy the State of Israel,” Netanyahu said in a video posted on social media.

“Yesterday he explained how he would do it — by unlimited enrichment of uranium to create an arsenal of nuclear bombs.”

“We’re not surprised,” Netanyahu said in the video from Paris, where he was to meet French President Emmanuel Macron.

Iran on Monday notified the International Atomic Energy Agency of its plan to open a center for the production of new centrifuges to be used for uranium enrichment, according to the head of the Atomic Energy Organization of Iran, Ali Akbar Salehi.

Salehi stressed the announcement did not mean Iran will start assembling the centrifuges, and “does not violate the (2015 nuclear) agreement” between Tehran and world powers.

Under the 2015 agreement, Iran can build parts for the centrifuges as long as it does not put them into operation within the first decade.

Netanyahu was visiting European leaders to discuss Iran’s regional involvement and nuclear programme, both seen by the Jewish state as grave threats.

European powers have been scrambling to preserve the 2015 nuclear deal since US President Donald Trump announced Washington’s withdrawal from the treaty last month.