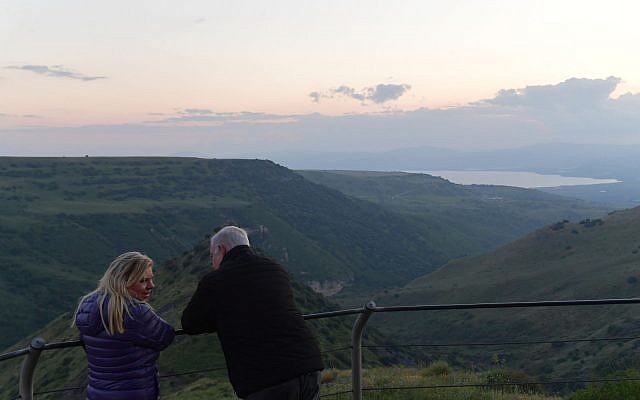 Prime Minister Benjamin Netanyahu said Tuesday that his next government will name a town in the Golan Heights after Donald Trump in honor of the US president’s decision to recognize Israeli sovereignty over the northern territory.

“I am here with my family and the masses of citizens of Israel at the foot of the Golan Heights, enjoying the happiness of the [Passover] holiday and our beautiful country,” Netanyahu said in a video statement standing beside his wife Sara during a family tour of the region bordering Syria.

“A few weeks ago I brought the official recognition, by President Trump, who recognized Israeli sovereignty over the Golan Heights forever. To express our appreciation, I will name a town or a village in the Golan Height after Donald Trump. I will bring [the proposal] before the cabinet [for a vote] soon,” Netanyahu said.

The prime minister is currently leading negotiations to form a new government after receiving backing from a majority of the lawmakers elected in this month’s general election.

Trump first said he would recognize Israeli control of the Golan in a tweet on March 21. He signed the actual proclamation on March 25 when Netanyahu visited the White House, in a move seen by some as timed to help the Israeli premier in his re-election bid. It upended decades of US policy and drew some international condemnation, but also Israeli praise.