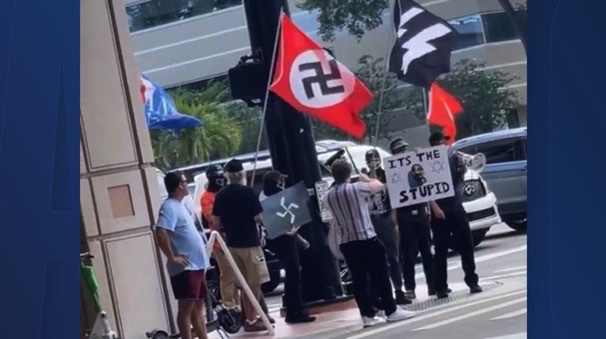 TAMPA, Fla. — A group of antisemitic demonstrators outside of the Tampa Convention Center waved Nazi flags and posters on Saturday.

The Florida Holocaust Museum said people near the convention center were “appalled” the demonstrations occurred in Tampa, the museum told 10 Tampa Bay in an email.

“Openly and proudly displaying genocidal symbols is a direct threat to the Jewish community,” Florida Holocaust Museum Chairman Mikel Igel stated in the email. “Carrying the Nazi flag, or that of the SS, the unit responsible for some of the worst atrocities of the Holocaust, is an indefensible act of pure hatred.”

The demonstrations weren’t the first example of antisemitism this year in the Tampa Bay region.