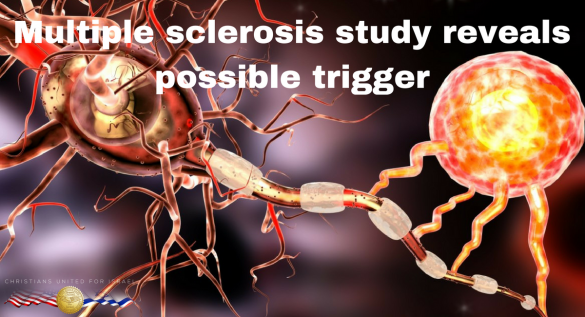 Multiple sclerosis, one of the most devastating neurodegenerative diseases, affects some 2.5 million people worldwide and has no known cure.

Researchers have long speculated that MS is triggered by the body’s own immune system unleashing an uncontrolled attack on myelin sheaths that protect nerve cells (neurons).

A study published by Israeli scientists in the Journal of the American Chemical Society (JACS) pinpoints a structural instability in the myelin membranes, the “insulating tape” surrounding neurons.

This vulnerability seems to be what gives the immune system access to otherwise protected regions.

“We found that small modifications in the myelin sheaths create structural instabilities that may help the immune system to enter and attack neurons,” said principal investigator Prof. Roy Beck of Tel Aviv University’s School of Physics and Astronomy and Sagol School of Neurosciences.

“Current therapeutic approaches have focused on the autoimmune response without identifying a clear mechanism. Our research suggests a new avenue for multiple sclerosis therapies and diagnostics,” Beck said.

Breaking down the insulation

Axons, which carry electrical impulses in neurons, are surrounded by protective myelin sheaths. In MS, an autoimmune “error” mistakenly identifies these sheaths as hostile foreign entities and breaks them down.

The research, conducted by Rona Shaharabani, a doctoral student in Prof. Beck’s lab, pinpoints the precise alterations to the myelin sheaths that result in structural instabilities, creating “easy access” for autoimmune attacks.

“After years of research, we were amazed to discover that a possible trigger for the outbreak of the disease could be found in the membrane’s physical structure,” said Beck.