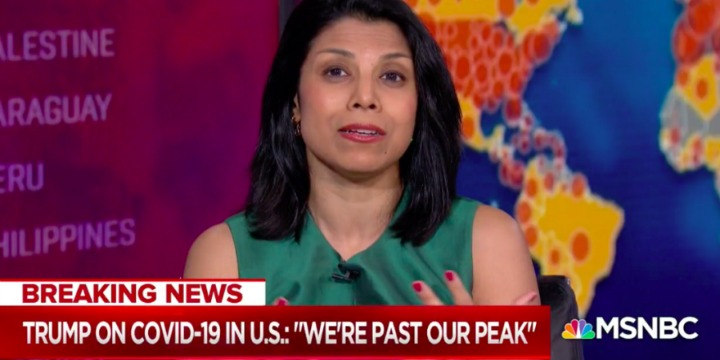 A background graphic on MSNBC last week showed “Palestine” in a rolling list of countries depicting numbers associated with the coronavirus pandemic, despite it not being an independent nation.

The graphic was displayed during “The 11th Hour With Brian Williams” on April 16 while internal medicine physician Lipi Roy was analyzing the number of COVID-19 cases, as well as discussing the debate over whether or not some parts of society should reopen.

Media critics criticized MSNBC for the background listing “Palestine” as a country.

“Now, more than ever, it’s important for the media to engage in careful and thoughtful reporting,” Sean Durns, senior research analyst at CAMERA, the Committee for Accuracy in Middle East Reporting in America, told JNS. “And the facts are clear: ‘Palestine’ is not, and has never been, an independent state.”

He said “that’s what negotiations between Israel and the Palestinian Authority are about—negotiations that the media has reported on for years, and which the PA [Palestinian Authority] has, in recent years, declined,” he continued. “MSNBC’s decision to grant de facto recognition of statehood is but another example of careless reporting at a time when we can least afford it.”