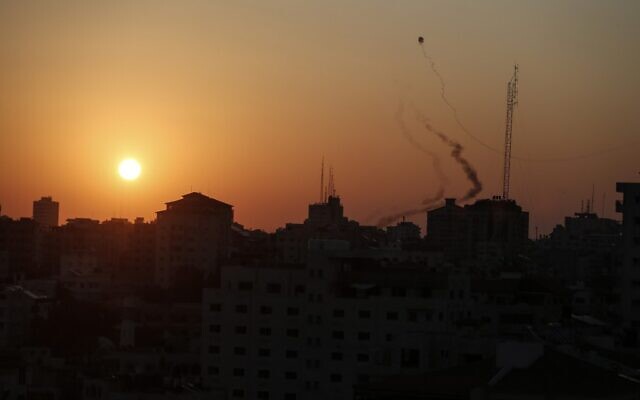 The Israel Defense Forces confirmed that one projectile had been fired from the Palestinian enclave, but didn’t comment on where it landed.

An Eshkol Regional Council spokesperson said the shell had apparently struck an uninhabited area outside a local community.

“The matter is being checked and searches are being carried out in the area,” the spokesperson said.

The launch triggered warnings on the IDF Home Front Command’s smartphone application for people in the area but not sirens as the projectile was not heading toward a populated area.

There was no immediate claim of responsibility.

The attack followed several days of relative calm on the Gaza front following a flare-up between Israel and the Palestinian Islamic Jihad terror group earlier this month.

Also on Monday, a Qatar official said aid money would be handed out Wednesday to Gaza residents as part of a ceasefire agreement between Israel and terror groups in the Strip.

Qatari envoy Mohammed al-Emadi said 70,000 poor families will each receive $100 from postal banks in the Strip. In the past year, these banks have distributed $100 Qatari grants several times to tens of thousands of needy families in the coastal enclave.

Israeli forces had been gearing up for escalating violence in the West Bank after Palestinians announced a “day of rage” on Tuesday to protest the US decision to no longer consider Israeli settlements illegal.

Israel and Islamic Jihad fought a two-day skirmish on November 12-13 after the IDF killed Baha Abu al-Ata, a top commander in the terror group. During the fighting, the terror group fired some 450 rockets and mortars at the Jewish state, which responded with many retaliatory strikes in Gaza.

Unlike in previous rounds of fighting, the Hamas terror group stayed on the sidelines, and Israel avoided hitting it.

Since then there have been a couple of rare quiet weekends along the Gaza border, where for two weeks in a row Friday protest marches were called off. The move — being only the third and fourth time the weekly demonstrations were canceled since they began in late March 2018 — was seen as marking an attempt by Gaza’s Hamas rulers to avoid fresh confrontation with Israel.

The High National Commission for the March of Return and Breaking the Siege, which includes representatives of Gaza-based terror groups and political factions, said the protests were canceled last Friday to allow “the Palestinian people to continue to provide assistance to family members of martyrs and wounded persons and those whose homes were damaged in the Israeli aggression.”