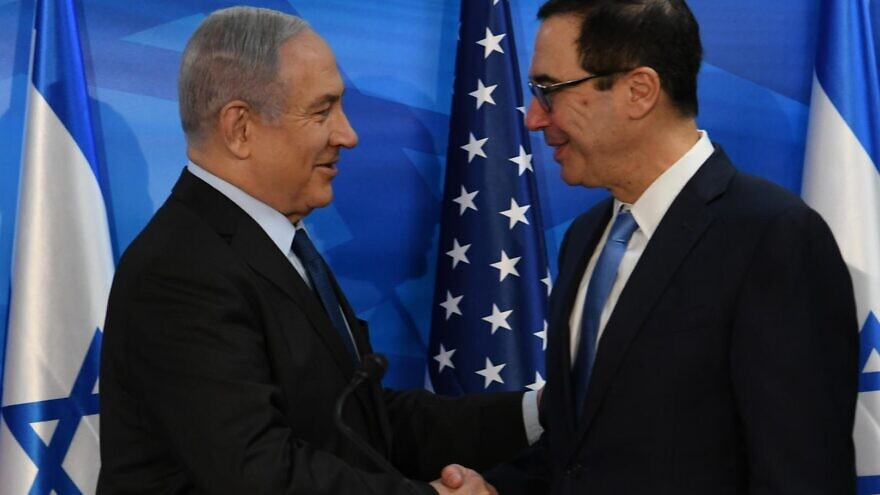 “We are not doing this to hurt the people of Iran; we are doing this so that Iran stops their bad activities and exporting terrorism, looking to create nuclear capabilities and missiles,” said U.S. Treasury Secretary Steven Mnuchin.

(October 28, 2019 / JNS) U.S. Treasury Secretary Steven Mnuchin, who met with Israeli Prime Minister Benjamin Netanyahu in Israel on Monday, said that U.S. sanctions will be increased against Iran, though the financial penalties aren’t meant to harm the Iranian people.

“We are not doing this to hurt the people of Iran; we are doing this so that Iran stops their bad activities and exporting terrorism, looking to create nuclear capabilities and missiles,” he said in pledging that Washington “will continue to ramp up more, more, more.”

As part of its “maximum pressure” campaign against Iran since withdrawing the United States in May 2018 from the 2015 nuclear deal, the Trump administration on Friday declared the regime as a “jurisdiction of primary money-laundering concern.”

This action by the U.S. State and Treasury Departments compels U.S. banks to search their foreign relationships for any transactions with Tehran. The two agencies launched a new program to address concerns that the maximum pressure campaign has hindered Iran from getting humanitarian assistance as its economy has declined significantly.

U.S. special representative for Iran Brian Hook said the new humanitarian mechanism “will make it easier for foreign governments, financial institutions and private companies to engage in legitimate humanitarian trade on behalf of the Iranian people while reducing the risk that money ends up in the wrong hands.”

“Requiring deeper due diligence raises the risk that any remaining foreign banks, firms and individuals caught doing business with Iran will face severe sanctions themselves, including being cut off from the world’s most important economy,” reported The Wall Street Journal.

“Iran is a jurisdiction of primary money-laundering concern that deliberately ensures that there is no transparency in their economy so they can export terrorism around the world,” said Mnuchin.