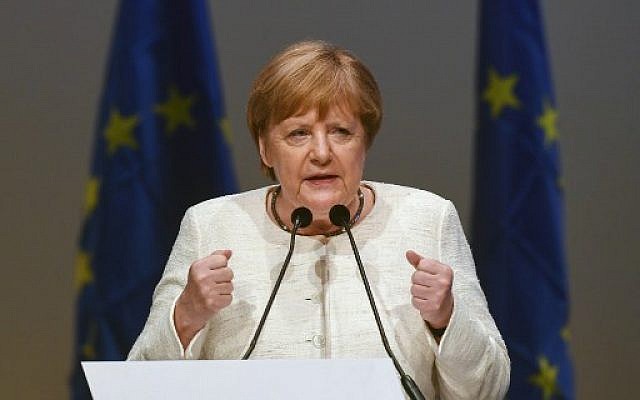 Merkel addressed the current rise in anti-Semitism in her country, saying in a CNN interview that it has “always had a certain number of anti-Semites among us, unfortunately.”

Last week the German government’s anti-Semitism commissioner, Felix Klein, set off a controversy when he suggested in the wake of a rise in anti-Semitic attacks that it was too dangerous for Jews to wear the traditional Jewish head covering in parts of the country.

Merkel said Germans had to face up “to the specters of the past.”

“We have to tell our young people what history has brought over us and others,” the chancellor said.

On Monday Merkel’s spokesman stressed the country’s responsibility to ensure security for all Jews wearing kippahs anywhere in the country without having to fear anti-Semitic attacks.

“It’s the job of the state to ensure that anybody can move around securely with a skullcap in any place of our country,” Steffen Seibert said.