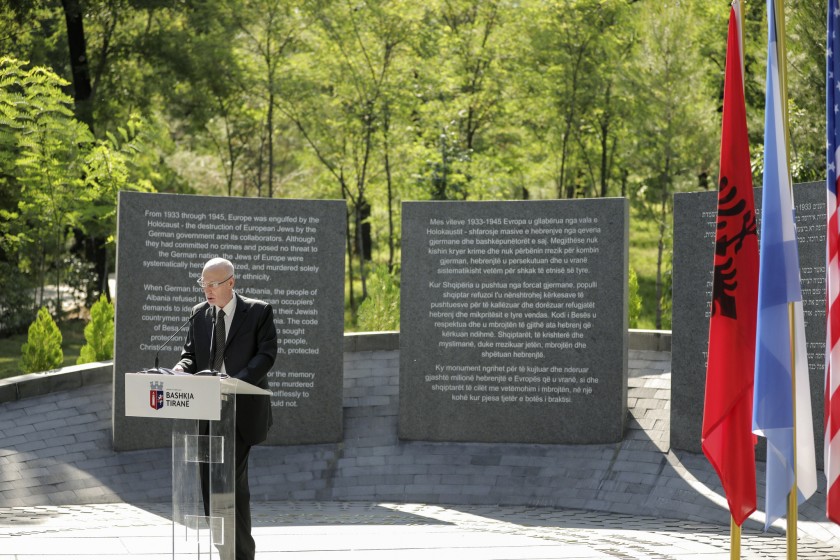 Memorial Dedicated to Albanians Who Rescued Jews During the Holocaust

A memorial to Albanians who rescued Jews during the Holocaust, established jointly by the US and Albania, was dedicated on Thursday, with the US ambassador to Albania calling the country’s legacy of rescuing Jews “an inspiring story of humanity, courage, and honor.”

The memorial in the Grand Park of Tirana was established by the US Commission for the Preservation of America’s Heritage Abroad and the Municipality of Tirana, and marks Albania’s almost unique place in the history of the Holocaust.

According to Israel’s Holocaust memorial and museum Yad Vashem, some 600-1,800 Jews fled to Albania during the Holocaust. After the Germans conquered the country in 1943, Albanians refused to hand over lists of Jews, provided Jews with documents allowing them to hide within the general population and took other measures that led to the survival of almost the entire Jewish community, with more Jews remaining in Albania after the war than before.

Many attribute this accomplishment to the concept of besa, a code of honor in Albanian society that demands ethical action and respect for life, especially on behalf of guests and those in need.

US Ambassador Yuri Kim said at the dedication of the memorial, “After Hitler’s rise to power, Albanian families sheltered hundreds of Jewish people from around Europe, saving them from Nazi forces. People from all walks of life, Muslims, Christians, elites, peasants, teachers, government officials, and clergy — an entire nation — worked to rescue Jews. It is an inspiring story of humanity, courage, and honor.”