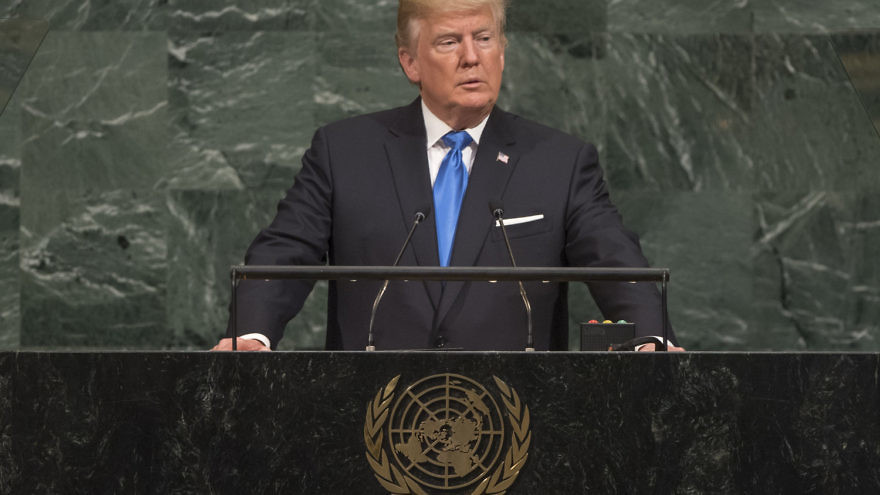 (September 23, 2019 / JNS) As U.S. President Donald Trump left the White House on Sunday for the U.N. General Assembly meeting in New York on Tuesday, he expressed doubt that a meeting with Iranian President Hassan Rouhani would happen at the event. Neither he nor Rouhani was “ready yet,” he said, adding however that he is a “flexible person” and “nothing is ever off the table completely.”

While Israeli Prime Minister Benjamin Netanyahu and Trump had expressed interest in meeting on the sidelines of the UNGA to discuss a possible defense pact, the Israeli prime minister called off his planned attendance in the wake of last week’s general election results.

U.S. Secretary of State Mike Pompeo said at a news briefing with U.S. Treasury Secretary Steven Mnuchin earlier this month that Trump “is prepared to meet [Rouhani] with no preconditions.”

Rouhani, who denies that Iran is pursuing nuclear weapons, has expressed interest in talking to the United States only after sanctions are lifted.

Pompeo and Trump’s comments come in the context of the Trump administration’s “maximum pressure” campaign to undermine Iranian nuclear efforts through diplomatic means, including sanctions and pulling out of the 2015 Joint Comprehensive Plan of Action, aka the Iran nuclear deal.

The meeting, if it occurs, would be Trump’s first with Rouhani.

Trump is expected to meet with a number of world leaders on Monday, including Egyptian President Abdel Fattah el-Sissi. Their meeting will follow 48 hours of protests in Egypt against Sissi’s regime.