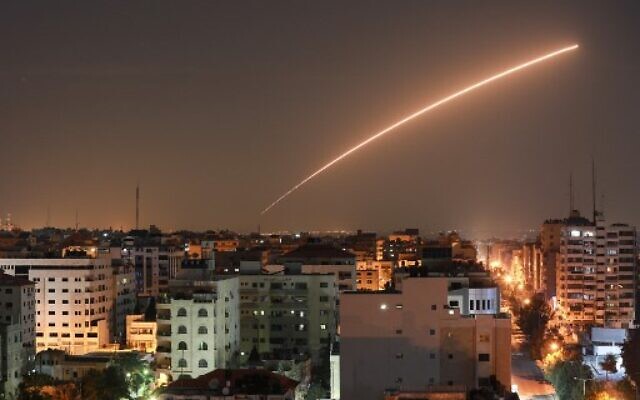 The Palestinian Islamic Jihad and other terror groups in the Gaza Strip resumed firing rockets into southern and central Israel after dawn Wednesday after a brief overnight respite in the violence. The Iron Dome system intercepted several of the projectiles, and there were no immediate reports of injuries or damage.

Sirens sounded in southern Israel and then later in central Israel near Latrun and Beit Shemesh. Residents reported loud explosions, apparently the Iron Dome interceptors taking down the rockets.

Another salvo from Gaza was fired toward the southern city of Netivot. There were no immediate reports of casualties or damage.

Israel’s targeted killing before dawn Tuesday of Islamic Jihad terror chief Baha Abu al-Ata was met by over 220 rockets launched throughout Tuesday and Wednesday morning by terror groups in Gaza, the military said.

Since Tuesday, two people in Israel have been wounded directly by rocket fire, both of them sustaining light injuries from shrapnel. In addition, 23 people were lightly wounded after falling while running to a bomb shelter and 23 others were taken to the hospital after suffering anxiety attacks and other “stress symptoms” due to the attacks, the Magen David Adom ambulance service said.

An eight-year-old girl collapsed suddenly, apparently from a heart attack, while hiding in a bomb shelter during a rocket attack on the city of Holon. She remained in serious condition on Wednesday.

The IDF on Wednesday morning said it targeted a squad of terrorists who were trying to launch rockets at Israel. The Palestinians reported that two people were killed and two people were injured in Israeli airstrikes, bringing the death toll in Gaza since Tuesday morning to 12.

Eleven of those killed have been identified as members of the Palestinian Islamic Jihad and Fatah’s al-Aqsa Martyr’s Brigades by the terror groups.

The Wednesday morning rocket fire came after a brief six-hour respite in the violence overnight, during which no rockets were fired. There were also no reports of IDF airstrikes in that period.

The Israel Defense Forces launched its campaign of retaliatory airstrikes — mostly against rocket-launching squads — on Tuesday afternoon after approximately six hours of unanswered rocket attacks on central and southern Israel from the enclave.

The renewed violence came as Islamic Jihad vowed to avenge the killing Abu al-Ata. Senior Islamic Jihad officials on Tuesday evening said the “real response” to Abu al-Ata’s elimination had yet to come.

There was no statement from either side on a ceasefire, though Egyptian and UN officials on Tuesday night said were pushing for one.

Israel has notably been refraining from conducting strikes against the Hamas terror group, the de facto rulers of the Gaza Strip. In general, the IDF’s modus operandi has been to attack Hamas targets in response to any violence emanating from the Strip, as it considers the terror group to be the sovereign of the enclave.

IDF spokesperson Jonathan Conricus said Israel sent messages to Hamas, through unidentified third parties, urging the terror group to not take part in this round of fighting and that in return the IDF would not carry out strikes against it.

“We are monitoring [Hamas’s] activities and will conduct ourselves accordingly,” Conricus said Tuesday.

Egyptian officials, who spoke on condition of anonymity, said Cairo was attempting to deescalate tensions between Israel and the terror groups. The officials added that the Egyptian General Intelligence Service stepped up communications and “opened channels” with the US and the European Union.

In the past year, both the Egyptian General Intelligence Services and UN Special Coordinator to the Middle East Peace Process Nickolay Mladenov have been involved in brokering unofficial ceasefires between Israel and the Gaza terror groups.

Schools in southern Israel and as far away from Gaza as the city of Rehovot were ordered to remain closed Wednesday. This included the larger southern cities of Ashkelon, Ashdod, Beersheba and Yavne, meaning hundreds of thousands of students stayed home.

But the Home Front Command said late Tuesday night there were no security restrictions preventing schools and businesses in the Tel Aviv metropolitan area and Shfela region from operating normally, after classes were canceled and non-essential businesses were temporarily closed for the first time in Tel Aviv since the 1990 Gulf War.

In accordance with Home Front Command orders, gatherings of more than 100 people were allowed only in closed locations in areas close to Gaza, including the Gaza envelope region and the Lachish, Western Negev, Central Negev and Shfela regions. In the Tel Aviv metropolis, that order was be relevant to gatherings of more than 300 people.

Hospitals and other emergency services in Israel were put on high alert in light of the ongoing rocket attacks.

Ziyad al-Thabet, deputy minister of the Hamas-run education ministry, told the Hamas-linked al-Rai news site that it was decided that educational institutions in Gaza would also be closed Wednesday.

The high-level security cabinet convened Tuesday evening to discuss the situation and Israel’s further actions. They were to meet again Wednesday morning.

In the predawn hours of Tuesday morning, Israeli Air Force jets fired precision ammunition at a building in the Shejaiya area of Gaza City where Abu al-Ata was located, killing him and his wife, in a joint operation by the IDF and Shin Bet security service.

According to the IDF, Abu al-Ata was the true “senior commander” of the Islamic Jihad in the Gaza Strip, having ordered the group to carry out most of the significant rocket and border attacks from the Palestinian enclave in recent months and planning to carry out more.

He was also identified by Israel as the primary obstacle to a long-term ceasefire agreement with Hamas and the other terror groups in the Strip.

Shortly after Abu al-Ata’s assassination, the PIJ began launching dozens of short- and long-range rockets, firing the majority of them at the Israeli communities around Gaza and a smaller number at major cities in central Israel throughout the morning.

Dozens of the incoming projectiles were shot down by soldiers operating the Iron Dome missile defense system, representing a 90% interception rate for rockets heading toward populated areas, the army said. The remaining 10% of projectiles struck homes, businesses and roadways, causing significant damage, but relatively few injuries.

In response, the military said its fighter jets, helicopters and other aircraft targeted Palestinian Islamic Jihad “training compounds, including one used by PIJ’s naval commando unit, the shaft of an offensive terror tunnel in the northern Gaza Strip and a tunnel digging site in the central Gaza Strip,” as well as several underground facilities used to manufacture and store weapons, observation posts and training camps in three rounds of airstrikes.

These sites — specifically the underground ones — are seen as critical facilities for PIJ, which the terror group has invested large sums of money to construct.

Israel and Gaza have engaged in several sporadic rounds of violence over the last two years as the sides attempted to reach a long-term ceasefire.