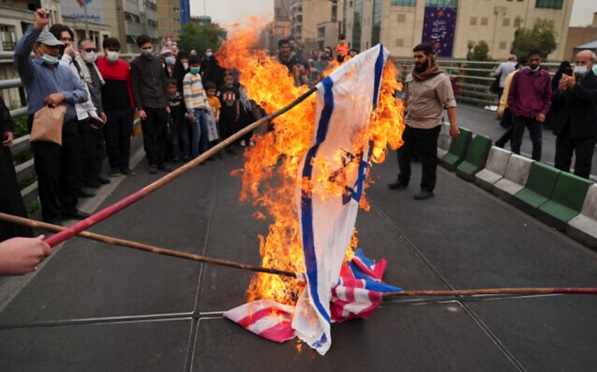 Thousands of Iranians marched in rallies in the capital Tehran on Friday to mark Jerusalem Day, with Iran’s leaders and top generals railing against Israel and evoking the Jewish state’s destruction. It was the first time such marches were held since before the coronavirus pandemic.

Iran has been marking the day, the last Friday of the Muslim holy fasting month of Ramadan, since the start of its 1979 Islamic Revolution led by the late Ayatollah Ruhollah Khomeini. It is also known as al-Quds Day, after the Arabic name for Jerusalem. Iran claims it is an occasion to express support for the Palestinians.

Demonstrators chanted the “death to Israel,” and “death to America,” slogans that have become tradition in mass rallies in Iran since its revolution. Demonstrators also set fire to American, British and Israeli flags, as ballistic missiles were put on display.

Iran does not recognize Israel and supports Hamas and Hezbollah, terror groups that like Tehran call for the Jewish state’s destruction. Israel views Iran as its top enemy in the Middle East.