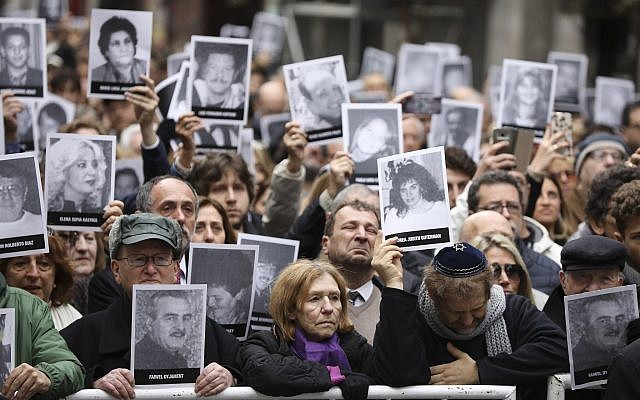 Argentina’s government on Thursday branded Hezbollah a terrorist organization and froze its assets, 25 years to the day after a bombing blamed on the Iran-backed group destroyed a Jewish community center in Argentina’s capital, killing 85 people.

The nation’s Financial Information Unit took the action a day after Argentinian President Mauricio Macri’s government created a list of terrorist organizations to help coordinate actions with other nations and as the nation held memorial services for victims of the attack, for which no one has been convicted.

“At the present time, Hezbollah continues to represent a current and active threat to national security and the integrity of the financial, economic order of the Argentine Republic,” the unit said.

It’s not clear how much impact the ruling will have or how many assets Hezbollah might have in Argentina. The Lebanese group already has been put on terrorism lists by the US, the European Union and several other nations.

The designation came as Argentina marked 25 years since the 1994 attack on the AMIA Jewish center.

Sirens rang out in cities throughout the country at 9:53 a.m. the exact time the bomb ripped through the Buenos Aires building, and names of those killed were read out at official ceremony.

Both Argentina and Israel have also attributed the 1992 bombing on the Israeli embassy in Buenos Aires that left 29 dead on Hezbollah.

“We’ll continue to act in every place to include Hezbollah on the terror organizations list. The entire world must unite in the struggle against terror spread by Iran and its proxies,” Katz wrote on Twitter.

The move was also praised by Deputy Foreign Minister Tzipi Hotovely, who said the issue was at the center of her talks with Argentine officials during her recent visit to the South American state.

The memorial service began with a moment of silence, followed by a reading of the names of each of the 85 victims.

“How is it possible that 25 years later there has not been a single responsible person imprisoned for this crime against humanity?” asked Ariel Eichbaum, president of the association, which is known by its Spanish initials, AMIA.

“We continue to have questions to which there are still no answers. Twenty-five years have passed and the wound remains open, a wound that cannot be closed without justice,” he added.

US Secretary of State Mike Pompeo, who has ramped up pressure on Iran and Hezbollah while in office, was flying to Argentina to attend another memorial service on Friday and attend a meeting of international officials on fighting terrorism.

Argentina has accused top Iranian ex-officials of being behind the AMIA attack but has never been able to question them.

Decades of investigations have been beset by political interference and allegations of high-level corruption.

With its 300,000-strong Jewish community — second only to the US in the Americas — Argentina is the only country in Latin America to have suffered such an anti-Semitic attack.