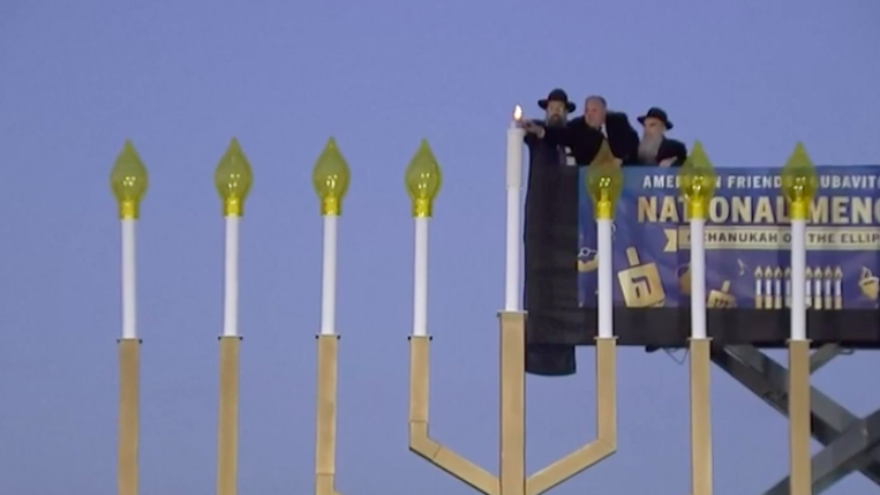 (December 22, 2019 / JNS) U.S. Interior Secretary David Bernhardt helped light the National Menorah on the Ellipse near the White House in Washington, D.C., on Sunday—the first night of Hanukkah, as Rabbi Levi Shemtov, executive vice president of American Friends of Lubavitch (Chabad) commemorated the 40th year of the program that has been made possible by the secretary’s department.

“We’re honored, of course, to have with us, Cabinet-level presentation every year,” said Shemtov prior to the lighting. “This year it is in the form of the one who is charged with overseeing national parks across the country, the beautiful parts of our land, including this Ellipse.”

Often, the lighting of the menorah is done by a Jewish member of the current administration, typically a member of the president’s Cabinet. Bernhardt, who is not Jewish, lit the shamash, the “helper candle.”

“I think we wouldn’t have had that wonderful story 40 years ago of a decline of the application if Secretary Bernhardt were in office at the time,” said Shemtov. “But it was what it was.”

Shemtov recalled the time his father, Rabbi Abraham Shemtov, was denied a permit in 1979 by then-Interior Secretary Cecil Andrus to put a menorah on government property, claiming that it would violate the First Amendment. Abraham Shemtov called Stuart Eizenstat, who then served as White House domestic-affairs adviser.

Eizenstat gave Andrus a choice: Approve the permit or have U.S. President Jimmy Carter do so in what would be an embarrassment for the secretary. The permit was approved, and Carter was the first honoree to help light the menorah, which has been erected and lit every year since then. It was designated in 1982 as the National Menorah by U.S. President Ronald Reagan.

Before the menorah-lighting, Bernhardt gave brief remarks that included touting U.S. President Donald Trump as a “steadfast advocate for people of faith and a staunch ally of the Jewish people all over the world.” The secretary mentioned Trump recognizing Jerusalem as Israel’s capital in December 2017 and moving the U.S. embassy there from Tel Aviv the following May.

“The light of religious freedom and tolerance is ever brighter,” said Bernhardt. “And so we gather here today in the glow of that light and the Festival of Lights. We have a beautiful 30-foot menorah that will stand as a daily reminder of the miracle of Hanukkah and the spirit of religious freedom.”

Thousands of people attended the annual public menorah-lighting event, which also featured traditional holiday foods such as potato latkes and jelly doughnuts, and live entertainment, with a performance by the U.S. Marine Band.

The holiday began on Sunday evening and concludes on Monday, Dec. 30.