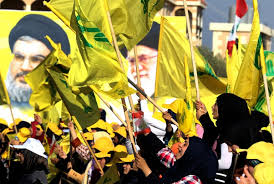 Lebanese media figure Baria Alamuddin writes that Hizbullah continues its globe-spanning drug trafficking activities, now using West African countries as major transit states for its drug shipments. She notes that Hizbullah and Syria, both sponsored by Iran, continue to bolster their status as the world’s major source of the amphetamine-based drug Captagon. However, since Saudi Arabia banned the import of Lebanese produce earlier this year, Hizbullah has had to divert its Captagon shipments through transit countries to obscure the country of origin.  West Africa has become a preferred option, especially counties with large Lebanese communities, such as Cote d’Ivoire, where Lebanese control a large part of the economy, as well as Togo and Congo.

Alamuddin notes further that Hezbollah’s illegal operations in West Africa — including money laundering, weapons proliferation, drug trafficking and other organized crime — are estimated to net the organization at least $1 billion a year. Warning that Hezbollah’s illegal activities may come to dominate Lebanon’s entire economy, transforming it into a narco state, she calls on the international community to fight Hizbullah’s globalized network for criminality and terrorism.