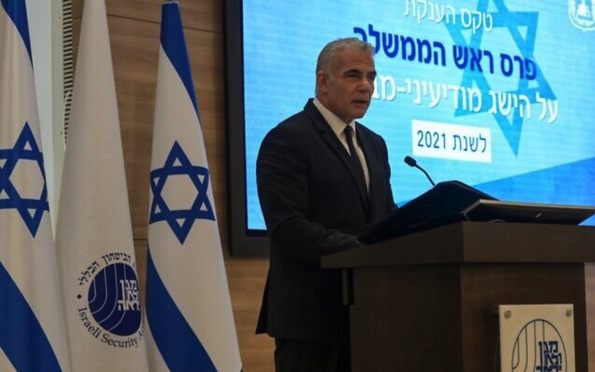 The Shin Bet, Israel’s domestic security and counterintelligence service, thwarted hundreds of terror attacks this year, Prime Minister Yair Lapid said Thursday at an awards ceremony for the organization’s agents who excelled in intelligence operations in 2021.

“The Shin Bet foiled hundreds of attacks since the beginning of the year. Shooting attacks, explosives, suicide [attacks], and kidnappings,” Lapid told assembled agents and staffers from the Shin Bet and other intelligence and defense agencies gathered for the biennial event at the Shin Bet’s northern Tel Aviv headquarters.

“You are not working against a static reality, but against a changing reality,” he said.

According to a statement from the Prime Minister’s Office, seven operations in 2021 were recognized in the ceremony for their “excellence, innovation, professionalism, extraordinary creativity, planning, professional and impeccable execution, and a result that has a major contribution to achieving the service’s goals.”