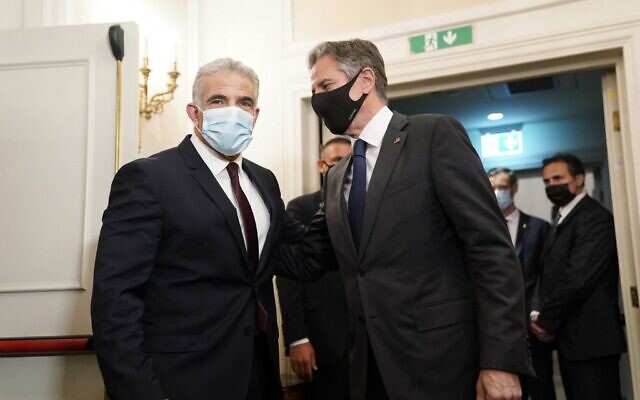 Lapid and Gantz said to warn US: Iran is close to nuclear threshold

Israeli authorities have warned US officials in recent days that Iran is closer than ever to attaining nuclear weapons, according to the Kan public broadcaster.

Foreign Minister Yair Lapid, Defense Minister Benny Gantz and other Israeli officials have addressed the issue with their American counterparts recently, issuing an “unusual warning,” according to the Sunday report.

Nuclear talks between world powers and Iran — attended indirectly by the US — have been ongoing for months in Vienna, but have stalled in recent weeks.

“Something has to happen with the negotiations with Iran,” a senior diplomat told Kan. “This ‘limbo’ cannot be a time when Iran is quickly advancing toward becoming a nuclear threshold state.”

Prime Minister Naftali Bennett is working to schedule a meeting in Washington with US President Joe Biden next month, though he is hampered by his wafer-thin majority in the Knesset, requiring his presence for every crucial vote.