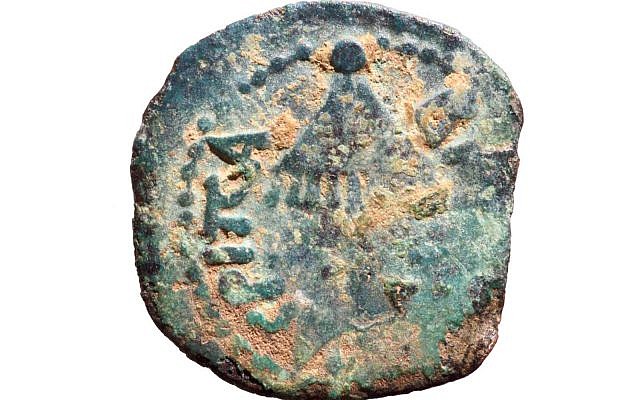 A boy found a 2,000-year-old coin from the Second Temple-era rule of Herod Agrippa, the last king of Judea, during a hike last week in the northern West Bank.

The rare piece was uncovered in the Shilo stream during a school trip, according to a Sunday statement from the Coordinator of Government Activities in the Territories (COGAT), an Israeli body that administers civilian matters in the West Bank under the Defense Ministry.

The coin features three stalks of grain on one side, and a royal canopy surrounded by an engraving reading “King Agrippa” on the other side.

The student found the coin on the eastern side of the stream — one of the main tributaries of Tel Aviv’s Yarkon River which flows to the Mediterranean Sea — and informed the group’s tour guide, the statement said.

The tour guide then contacted an employee of the Archaeology Unit at COGAT’s Civil Administration, who arrived in the area.

The schoolkid handed him the coin, which will join the Israel Antiquities Authority’s collection of National Treasures.