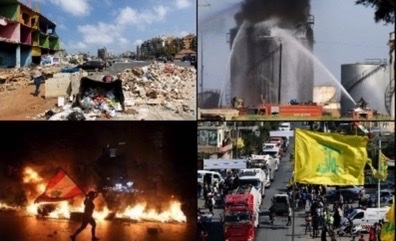 Spyer began with a “whistle-stop tour” of the “very, very dire, social and economic situation in Lebanon.” The Lebanese pound has lost 90% of its value in the last 18 months. Chronic shortages of fuel have reduced the capital to about two hours of electricity per day, forcing businesses and even hospitals to “scale back or shut down.” According to UN figures, 77% of Lebanese households are unable to purchase sufficient food. “It’s about as bad as it could possibly be.”

Once considered the “Paris of the Middle East,” Lebanon’s deterioration began with the arrival of Palestinian refugees and fighting organizations from Jordan in the 1960s, which helped precipitate the outbreak of a 15-year civil war in 1975, followed by a 15-year occupation by Syria. There was a glimmer of hope after Syrian troops withdrew in 2005 with the rise to power of prime minister Saad Hariri and the pro-Western March 14 movement, but it was extinguished by what Spyer called a “hostile takeover bid” by the Shi’a Hezbollah movement, a franchise of Iran’s Islamic Revolutionary Guards Corp (IRGC).