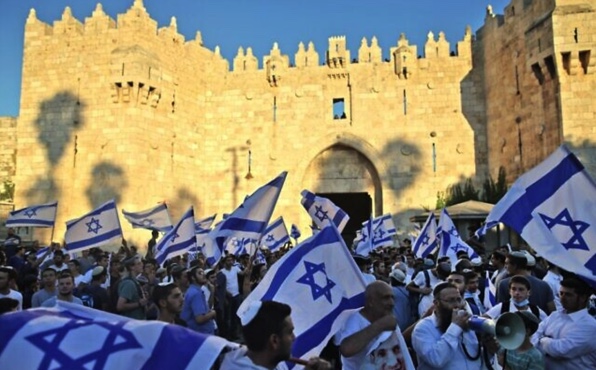 ‘Jewish, Talmudic rubbish’: Hamas vows to use ‘all capabilities’ against Flag March

Hamas leader Ismail Haniyeh warned Israel in a Sunday speech against allowing right-wing Israelis to conduct the annual Jerusalem Day “Flag March” in Jerusalem’s Old City next week, a year after Hamas fired rockets at Jerusalem when the event was last held.

“I want to clearly warn the enemy against committing these crimes and these steps. The Palestinian people, led by the resistance — especially those in the West Bank and Jerusalem — will not permit this Jewish, Talmudic rubbish to go unanswered,” said Haniyeh, speaking by video in front of a crowd in Gaza.

“Our decision is clear and unhesitating… We will resist with all our capabilities and we will not permit the violation of the Al-Aqsa Mosque or thuggery in the streets of Jerusalem,” said Haniyeh.