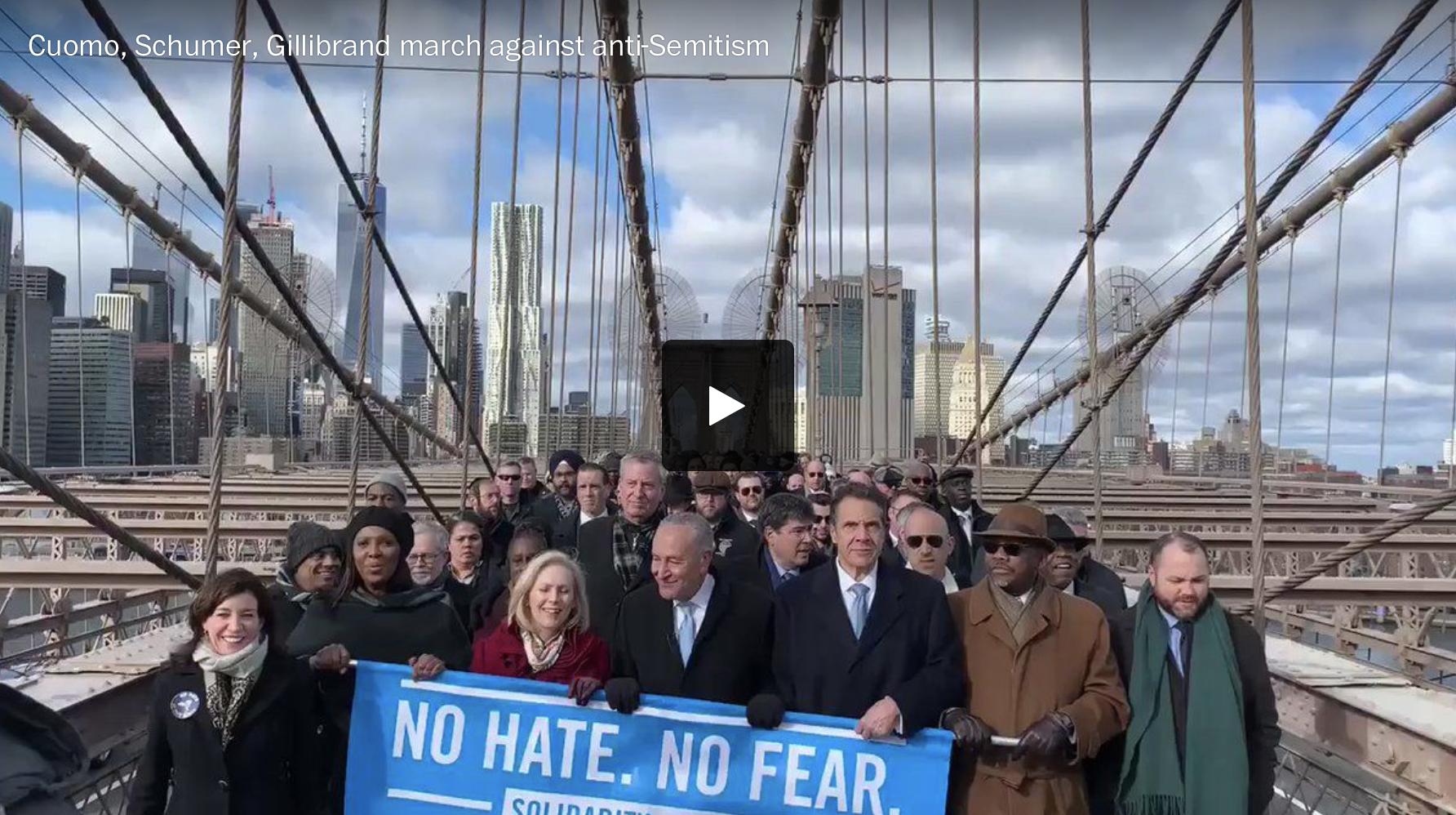 Thousands marched across the Brooklyn Bridge on Sunday in a show of solidarity with the Jewish community after several anti-Semitic attacks that have rattled the New York City area.

Marchers carried signs reading “No Hate. No Fear.” and “Jewish and Proud” from Foley Square in Lower Manhattan to Cadman Plaza Park in Brooklyn, where a rally featured several speakers. Some participants waved an Israeli flag in one hand and an American flag in the other, while others wore a Star of David pinned to their jackets.

“Today we are all Monsey,” activist Devorah Halberstam told rallygoers, according to the Jewish philanthropy organization UJA Federation New York. “Today we are all Crown Heights. … We will not tolerate being attacked in our shuls, in our homes or walking down the street.”

The most recent anti-Semitic violence happened on the seventh night of Hanukkah late last month, when prosecutors say a man barged into a rabbi’s house in Monsey, N.Y., and stabbed five people with a machete. A few weeks earlier, two gunmen in Jersey City killed three people inside a kosher market and a police officer at a nearby cemetery. New York City police have also attributed several assaults in December to anti-Semitism.

Gov. Andrew M. Cuomo (D) announced at the rally that the state would provide an additional $45 million to protect religious-based institutions, nonpublic schools and cultural centers. State police would continue to patrol neighborhoods with high percentages of Orthodox Jewish residents at a heightened level, Cuomo said. A new tip line was set up for people to report potential acts of hatred.
“What has happened in Brooklyn, what has happened in Monsey, N.Y., was an attack on every New Yorker,” Cuomo said. “And every New Yorker has felt the pain.”

A study released in October by the American Jewish Committee found that 84 percent of American Jews thought anti-Semitism had increased in the past five years. New York City reported more than 160 anti-Jewish incidents in the first nine months of 2019.

Helene Wallenstein, a rallygoer from Long Island, told the New York Times that people of different faiths should stand together because hatred can be directed at any target.

“We’re feeling it now, but it can turn on anybody,” she told the Times. “It’s not okay”
The city’s police department directed a request for the number of march participants to City Hall officials, who did not immediately respond to an email. The New York Post reported that more than 10,000 people attended.