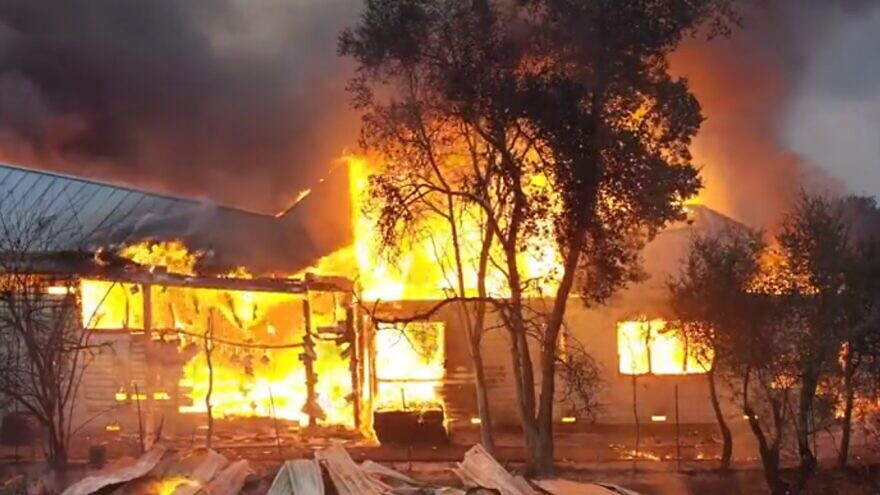 (October 28, 2019 / JNS) Up and down the state of California, synagogues, Hebrew schools and Jewish residents are dealing with effects of wildfires that have consumed tens of thousands of acres in recent days, from evacuations to school closures to days with no electricity as authorities try to limit the fire damage and danger.

In the Northern California, the Torah scrolls from Congregation Beth Ami in Santa Rosa were evacuated from the synagogue on Saturday as winds whipped flames from the Kincaid Fire in nearby rural Geyserville and brought the fire danger closer to the city. As of Monday morning, the Kincaid Fire had burned some 66,000 acres and led to the evacuations of an estimated 200,000 people.

California Gov. Gavin Newsom declared a state of emergency as fires raged fueled by dry conditions and strong winds. In some cases, like the Tick Fire in Santa Clarita in Southern California, which had consumed more than 4,600 acres and is 70 percent contained, firefighters are making significant progress. Elsewhere, however, new fires like the Getty Fire, which broke out around 2 a.m. near the famed Getty Center on Monday morning in Los Angeles, are being reported.

“We had Shabbat services yesterday when we got news about communities north of us being evacuated,” said Rabbi Mordechai Miller of Beth Ami in Santa Rosa. “We completed services and had our Kiddush because we weren’t under a mandatory evacuation. Afterwards, we took the Sifrei Torahs” from the building and moved them to services. Sunday’s Hebrew school was canceled.

While many from Miller’s congregation who were evacuated went to stay with friends and family in nearby communities, Congregation Kol Emeth in Palo Alto, where Miller’s daughter Sarah works, opened their homes should anyone need a place to go.

“We have not done this before, but we were very involved, post-fire, in helping that community during the [previous] fire,” said Lia Rensin, president of the board of directors at Kol Emeth. “We’ve had a huge outpouring of support from Kol Emeth congregants. I am beyond grateful to our members and so moved by their generosity. I am sure that if we have extra space, we will contact other synagogues in the areas affected to see how we can help as well.”

Miller praised the Kol Emeth congregation, noting that they have a history of being socially active and helping when they are needed.

The Kincaid Fire comes two years after the Tubbs Fire burned through Sonoma and Napa counties, killing more than 20 people, and destroying thousands of homes and structures, and just a year after the Camp Fire destroyed the town of Paradise. Both of those fires had broken out and burned so quickly that people had little if any time to act.

According to Miller, “the Tubbs Fire in 2017 fire had a profound effect on the community. A lot of rebuilding has taken place, but that isn’t even fully finished. In 2017, the fire was on Chol Hamoed Sukkot. There was a lot of wind, so I went outside at 2 a.m. to check on my sukkah. It had blown off the deck, and then I saw a lot of traffic coming down the road which borders my backyard and that didn’t make sense.

“People didn’t know about the fire,” he continued. “They didn’t know what was happening because it was 2 o’clock in the morning. This time we were aware of the fire because it started in Geyserville a few days ago, so there was always some concern that with the high wind it might spread. I think people were much better prepared.”

‘This has become all too common’

In Los Angeles on Monday, firefighters, were working to stop a brushfire that broke out before dawn. Jewish schools including Milken Community School and the American Jewish University were closed for the day. Many residents who live near the Getty Center were evacuated overnight as the fire quickly grew in the dark.

Late last week, it was the town of Santa Clarita, northwest of Los Angeles, that was dealing with a fast-moving wildfire. The Tick Fire has since been contained, and according to rabbis there, life is back to normal.

“We canceled Hebrew school on Thursday evening, and our preschool was closed on Friday. Our synagogue was outside the evacuation zone; however, some of our congregants were evacuated,” said Rabbi Jay Siegel of Congregation Beth Shalom in Santa Clarita. “Many of those evacuated stayed with other congregants until it was safe for their return. We had services Friday night and Saturday morning.”

Members of Temple Beth Ami in Santa Clarita were also evacuated last week, said Rabbi Mark Blazer, adding that “No one has lost homes, fortunately, and we had services Friday night.

“Unfortunately, this has become too common,” he continued. “We almost expect it every October.”