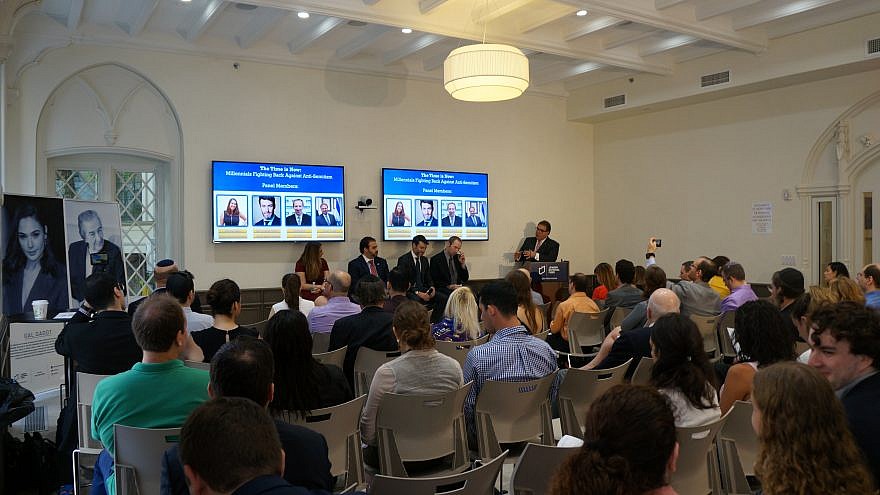 A panel organized by the Israeli-American Council of New York brought four millennial leaders together in Manhattan to grapple with anti-Semitism on the mode they use most often: social media.

The event, which took place on Aug. 7, included opening remarks from Chelsea Mandel, JNFuture New York board member, and Almog Elijis, spokesperson and Consul of Media Affairs for the Consulate General of Israel in New York. It was moderated by Russell Robinson, CEO of the Jewish National Fund, sought to focus on how the Jewish community is fighting back against the rise of anti-Semitism in America.

“In our world, we can be a spectator or a participant, Robinson told JNS. “Millennials represent the generation that is now, and there is no time out or sideline that they can sit back and wait.”

“It’s like playing whack-a-mole,” said Weiss said about the scale and nature of anti-Semitic activity.

‘Educating those who are uninformed’

Robinson said “millennials are shaping our products, lifestyle and work methodologies, and are standing up to the evil dark world of anti-Semitism.”

Still, recognizing the problem is one thing. Doing something about it is quite another.

Posnick said that allowing anti-Semitic rhetoric to go unchecked leads to an emboldening of those using dangerous dialogue. The goal is to call out anti-Semitism when it rears its head.

On a university campus, that might mean congregating with like-minded others to confront student or professorial verbal harassment. But addressing it online requires a different approach.

Bryan Leib, manager of Act.IL, Israeli-American Council of New York and the organizer of the panel, stressed that taking the initiative to call out and correct anti-Semitic language is the only way for the problem to be dealt with, and that even only five to 10 minutes of daily action can go a long way. That can be done online with reactive comments confronting such language.

However, Posnick noted that instead of simply countering anti-Semitic rhetoric, “forwarding positive points of view, and most importantly, educating those who are uninformed or under-informed is an immensely powerful course of action that can act as a preventative measure, stopping bigotry and bias before it has a chance to develop.”

Nevertheless, Weiss suggested that removing the offenses offline, when possible, is effective, as is an informational or educational approach.

“Social media presents a somewhat distorted version of reality that doesn’t necessarily accurately represent the people who make it up,” she said. “Real-life connections will always be more impactful and effective in correcting misconceptions about Jews and Judaism, and even potentially in changing the minds of anti-Semites.”

Posnick, however, told JNS “that a long-term strategy and pro-active approach is needed to move the needle even further.”

“We [StandWithUs] have been working with students in high schools and middle schools to educate them at a younger age, before they get to campus, and we have already seen the impact they have while still in high school. Today’s students are the leaders of tomorrow, and we must give them the education and empowerment they need to educate their peers and fight anti-Semitism.”