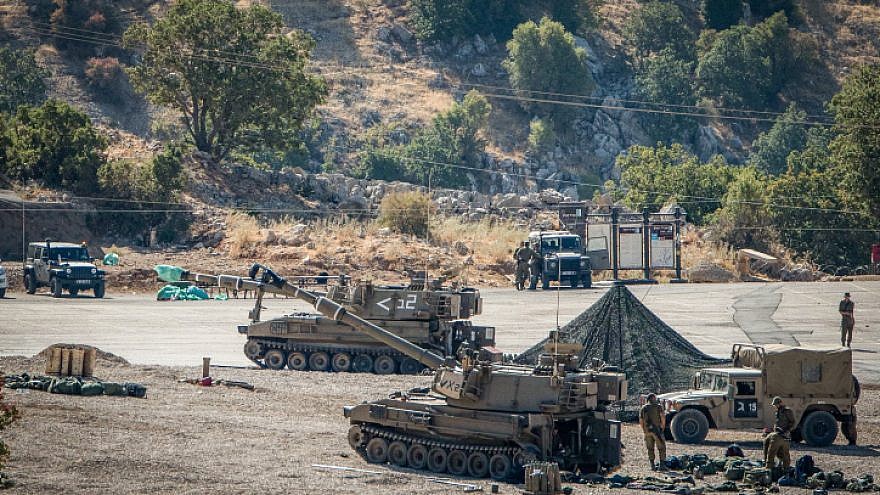 The Israeli airstrikes that rocked the Syrian village of Aqrabah, southeast of Damascus, on Saturday night are the latest phase in an ongoing shadow war against Iran that has been described by the Israeli defense establishment as an “active defense campaign.”

The strikes destroyed an Iranian cell active in Syria commanded by Quds Force chief Qassem Soleimani, which was planning multiple, simultaneous armed drone attacks on northern Israel, according to the Israel Defense Forces.

The Quds Force is Iran’s elite overseas operations unit. It has led efforts in recent years to build Iranian bases throughout Syria and turn the country into a new front against Israel. Those efforts have mostly been foiled by preventative Israeli actions, which rely on advanced intelligence-gathering capabilities and precision firepower.

Also on Saturday night, two drones crashed in Hezbollah’s stronghold in Dahiya, southern Beirut. One of the drones exploded, according to media reports, damaging a Hezbollah-owned office. Hezbollah claimed the drones belonged to Israel.

These incidents come days after U.S. officials said Israel was behind an air strike that destroyed an Iranian weapons’ storage facility in Iraq. That facility was reportedly a base run by the Iran-backed Popular Mobilization Forces Shi’ite militia. The base may have contained precision-guided missiles or other weapons that the Iranians stationed in Iraq temporarily, as part of a longer-term plan to shift them to Syria.

Ultimately, all of these recent incidents can be viewed from a single vantage point. That perspective was spelled out by IDF Maj. Gen (ret.) Yaakov Amidror, former national security adviser to the prime minister of Israel and head of the National Security Council from 2011-13.

“We are trying to prevent Iran from building an Iranian war machine in Syria,” Amidror told JNS. “Everything else is a result of this effort.”

Asked whether the latest developments increase the chance of a broader conflict, Amidror said, “whether it leads to war, no one knows, but this must be taken into consideration and [Israel must] continue with the necessary effort.”

‘Designed to explode on impact’

During a conference call with journalists on Sunday, IDF spokesman Lt. Col. Jonathan Conricus also placed the latest strikes in the larger context.

“The Iranians have tried to attack Israel in February and May in 2018, as well as in January 2019,” said Conricus. “Each time, there is a different ‘excuse’ and ‘reason’ to attack.”

“I know that Israel and the IDF are fighting from within Israel to defend our civilians and sovereignty. And I know that the Iranians are, on average, 600 to 1,000 kilometers away from their borders,” he said. “They’re trying to attack Israel. We understand that the Iranians will try to continue to attack. We are ready, and preparing for such operations. … We are prepared for a large amount of different scenarios and have the necessary offensive plans to retaliate.”

Conricus provided further details on the Iranian plan Israel foiled on Saturday night, stating that the Quds Force squad had been under Israeli intelligence monitoring for some time.

Senior Iranian operatives flew into Damascus International Airport with their attack drones, he said, before heading out to a secure compound in Aqrabah and linking up with Shi’ite operatives who were waiting for them.

Additionally, in the village, the operatives formed a highly compartmentalized and secretive squad, and prepared for their mission. They lived inside a closed compound that was under the direct control of the Quds Force and contained living quarters, as well as a storage structure for drones and explosive materials.

“There was a sentry that guarded the facility so that uninvolved civilians wouldn’t wander in,” said Conricus.

The squad’s pattern of operation was “quite similar to what we have seen in other places in the Middle East,” he added, referring to Iranian drone attacks on Saudi Arabia from Yemen as one example.

“We know these are drones with a similar range and technical depth as the drones used by Iranians in [other locations in] the Middle East … they are highly accurate and are designed to explode on impact,” he said.

These drones carried several kilograms of explosives each. “We understand their intention was to fly a number of attack drones towards targets located in northern Israel,” said Conricus.

Last Thursday, the IDF spotted four operatives from the squad in the village of Arneh in southern Syria, near Mount Hermon. The Israeli military understood that the suspects were attempting a drone attack and “took preventative action that led to a temporary thwarting” of the attack, said Conricus.

“They went back, and we understood on Saturday that another attack was imminent, and that is what led to us to attack in Aqrabah, based on intelligence we had available to us,” he added.

Elements within Syria’s Assad regime turned a blind eye to the attack plan while other regime elements actively cooperated with it, according to the IDF, which said that Damascus was “definitely aware of what was happening, allowed it to happen on Syrian soil, and hence it is responsible as well.”

The IDF’s Northern Command is currently at an elevated state of alert, as the military assesses the situation, affirmed Conricus.

In a statement, Maj. Gen. Tamir Heyman, commander of the Military Intelligence Directorate, said shortly after the strike in Syria that “tonight, thanks to a substantial intelligence effort, an Iranian attack was thwarted and harm to Israel was prevented. Iran’s proxies attempted in the past few days to launch killer drones at Israeli territory. An intelligence effort exposed the preparations of the force led by Soleimani, in an Iranian structure near Damascus, and made possible the thwarting of the attack.

“The Quds Force is continuing its efforts to destabilize the region. We are continuing our effort to stop the Quds Force’s attempts to harm Israel and her citizens.”

During an interview with the Kan Bet radio station on Sunday, Tzachi Hanegbi, Israel’s Regional Cooperation Minister and a member of the Security Cabinet, shed light on what caused Israel to take the unusual step of publicizing this strike.

Stressing that the decision was made with the full approval of the defense establishment, Hanegbi said that inside Iran, a “deep struggle” is underway over the usefulness of Soleimani’s ongoing project to build a war machine in Syria.

“There are forces in Iran that are relatively more realist and who are pleading with [Supreme Leader Ali] Khamenei, [saying] stop giving him [Soleimani] a free hand to do whatever he wants. There is no chance he will succeed. Israel knows and is one step ahead of us. It destroys all of the things we invest so much money in. Let’s focus on Iran, our economy, and let’s stop this adventure,” said Hanegbi.

Making sure that everyone knows another Soleimani-led plot had been foiled will strengthen such voices, said Hanegbi.

His comments echo remarks made by Mossad chief Yossi Cohen, who, speaking on July 2, hours after reported Israeli strikes against Iranian weapons facilities across Syria, said, “I believe that Iran will reach the conclusion that it is just not worth it.”