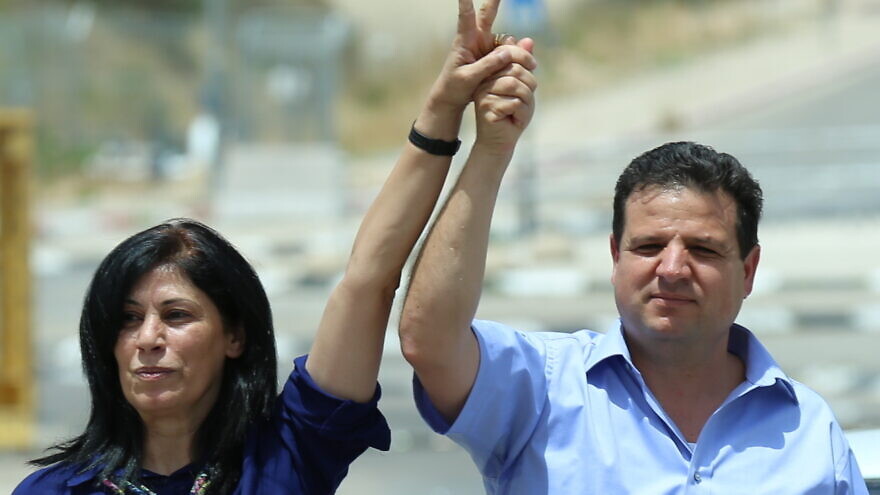 (December 18, 2019 / JNS) The announcement on Wednesday by Israel’s Shin Bet security agency that it has arrested some 50 members of the Popular Front for the Liberation of Palestine (PFLP) capped off a months-long targeting of the terror group for its role in the deadly terror attack on Aug. 23 that killed an Israeli teenager hiking with her father and brother.

Rina Shnerb, 17, died as a result of an explosion near the town of Dolev in Samaria; her brother, Dvir Shnerb, 19, was injured, along with their father, 46-year-old Rabbi Eitan Shnerb. According to Israeli reports, the explosive device included 3 kilograms (6.5 pounds) of explosive material, making it an “unusually powerful bomb.”

The arrests coincidently provide evidence of further links between the PFLP and the BDS movement. Among those arrested by the Shin Bet include Khalida Jarrar, 56, who the Israeli security service noted was the head of the terror group’s operations in the West Bank. Until recently, Jarrar also served as the vice chairperson, director and board member of the BDS organization Addameer.

“With regard to Jarrar, this is really the tip of the iceberg when it comes to the BDS/terror connection,” said Marc Greendorfer, president of the Zachor Legal Institute and author of “The New Anti-Semites: The Radicalization Mechanism of the BDS Movement and the Delegitimization Campaign Against Israel.”

“Jarrar is simply one example of the extensive overlaps between terror organization leadership and BDS, going all the way to the top, where the organizing and operational leadership of BDS [the BDS National Committee, or BNC] includes a coalition of groups designated as foreign terror organizations by the United States and other countries,” Greendorfer told JNS.

Last February, Israel’s Ministry of Strategic Affairs released a report titled “Terrorists in Suits” that found that Hamas and PFLP activists had infiltrated organizations that call for boycotts on, divestment from and sanctions on Israel.

The report, which examined 13 international BDS organizations, discovered that senior positions were held by 30 terror activists—20 of whom who had actually spent time in prison for their crimes, including murder.

It also determined that global interconnections between BDS and terror organizations were vast, with more than 100 connections being identified.

Founded in 1992, Addameer claims to be an NGO that works to support Palestinian prisoners, yet evidence suggests that the organization is actually an affiliate of PFLP.

According to NGO Monitor, more than half of Addameer’s current and former employees, as well as lawyers that work for it, have links to the PFLP; other employees have ties to Hamas.

‘Affecting countries across the West’

“The BDS movement was funded by terrorists, and it is being led by terrorists across the world. There must be a wide recognition of these connections, and countries must wake up to that fact and take action,” said Yifa Segal, director of the International Legal Forum.

“This problem doesn’t affect only Israel; it is also affecting countries across the West. They aim to entrench institutional and civilian support for terrorism, to effectively recruit manpower; to raise funds, as well as to radicalize the population and subvert democratic values. They are present on the streets, on college campuses and in parliaments hiding under the guise of legitimate human-rights organizations,” he explained.

Sahar Francis, the foreign-affairs representatives of Addameer, has attended numerous events and conferences abroad, including in the United States. In 2017, she was at an event in Brooklyn, N.Y., organized jointly by Addameer, the Center for Constitutional Rights, Adalah NY and Black Youth Project 100.

These tours included stops at the University of California, Irvine, and San Francisco State University, which were events co-sponsored by local SJP affiliates and Jewish Voice for Peace. She also attended events sponsored by the Palestinian Youth Movement, which included other sponsors such as the Arab Community of South California, Women’s International Network, American Muslims for Palestine and the Palestinian American Congress.

Both SJP and USCPR have shared Addameer’s content on social media.

Moving forward, Greendorfer hopes that Jarrar’s terror arrest and her role within Palestinian NGOs with ties to the BDS movement will spur further action by U.S. authorities against BDS organizations.

“BDS and terror are two sides of the same coin, and Jarrar is the rule, rather than the exception, in this regard,” he said.

“We’ve pointed out these connections and even listed those BDS leaders who are also terror group operatives in our scholarship and our court briefs, and hope that United States’ law enforcement takes notice of this dangerous infiltration of terror groups into U.S. social-justice campaigns.”